Poor AOL; you used to be at the top of the tech world, and now you've been reduced to hosting squatters in your office. Alright, so Eric Simons might not exactly fit your picture of a squatter, but that doesn't change the fact that that was exactly what he was doing.

The story started back when Eric was still in high school, when he entered Imagine K12, a tech incubator that happens to be hosted at AOL's Silicon Valley HQ. Even though his start up, an education based project called ClassConnect, burned through its funding pretty fast, Eric wasn't giving up. Looking for ways to keep working without having to pay the bills, Eric decided to stick around at AOL HQ.

It actually wasn't all that hard – all he had to do was find a nice out of the way couch to sleep on, and figure out the security routine, and he was pretty much set for the next two months. That's right: working all day and through most of the night, Eric managed to keep working on his start up while living in AOL's office for two months. 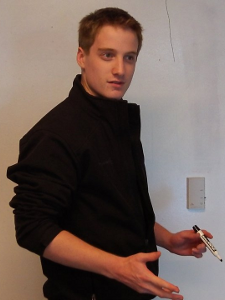 It was a sweet deal while it lasted. Eric kept his own schedule, lived off of about $30 a month, and got to start every morning with a workout in AOL's posh gym. Then, after a hard day's work, he went back to his couch and crashed for a few hours. Wash, rinse, repeat.

Unfortunately for Eric, the grace period didn't last all that long. “One of the guys who manages the building came in at like 5 or 6 in the morning,” Eric explained, “and he scoured the entire place to find me. And he ripped me a new one. He was pissed that I was treating it like a dorm. Which was reasonable.” Right.

So, how are things going for Eric now? So far, things are starting to look up. Eric's managed to secure more funding (although he's still looking to raise more), and he still gets to go in to AOL every day as part of the Imagine K12 program. He's careful to get out by closing time, though: “When I'm done, I beeline straight for the door.”