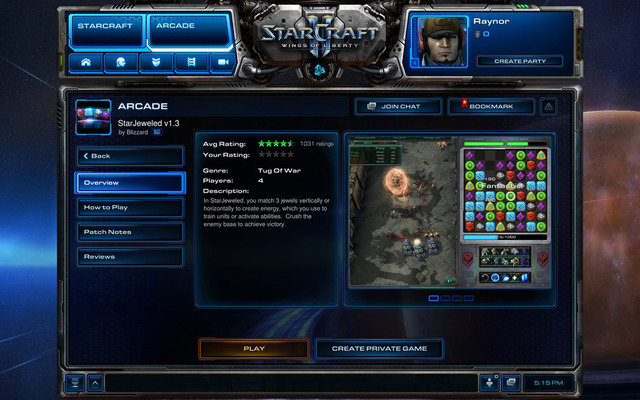 StarCraft II fans have been waiting for this update for months and today, Blizzard released the 1.5.0 version for its best selling sci-fi RTS series. This free patch adds quite a few new features to the game, including the Arcade mode.

As explained on a post on the game's official website, the new Arcade feature is supposed to make it easier to find games on maps officially made by Blizzard as well as third party maps. The post states:

The left side of the Arcade main menu is composed of a series of buttons: Spotlight, Browse, Open Games, Fun or Not, Bookmarks, and Recently Played, each offering different ways to access Arcade games. There’s also an Arcade chat button up top and a search bar so you can jump right to a game if you know its name.

In addition to the Arcade addition, the user interface for StarCraft II has gotten a makeover. Blizzard has also put in some additions to the game's editor, including a cutscene feature that lets users "play ‘director’ and craft epic cinematic experiences that can be played back in-game."

Blizzard is currently working on the first expansion pack for StarCraft II, Heart of the Swarm. So far, the company has yet to announce a launch date but some people believe it might be released before the end of 2012.