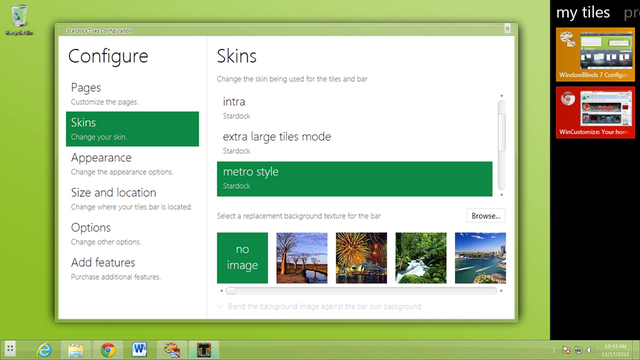 Stardock has released a public beta of it's latest application, Tiles. Tiles is an application that lets users manage running applications and windows with a customizable sidebar. At the top are the labels for each page such as 'My Tiles' or 'Documents' or 'Apps'. Users can then drag and drop programs, documents, or website URLs onto Tiles. If the program is running, users can hold the shift-key down and drag the app onto Tiles immediately. When the program is inactive, it appears as an icon. When it is active, it appears as a live preview tile. Additional skins are available and can be downloaded from sites such as WinCustomize.com, and there are several customization options available in the app.

"Traditionally, productivity-minded users would make use of virtual desktops or enhanced launching programs like our own ObjectDock," said Brad Wardell, president & CEO of Stardock. "Today, more and more users have multiple monitors and are looking for better ways to organize what they're working on. That's where Tiles comes in."

The beta version of Tiles is fully functional with the company looking for feedback from users on additional features and usability they would like to see. Users can also optionally add features through the integrated in DLC interface. The free public beta can be downloaded from the Tiles website.