Apple's CEO Steve Jobs has been on somewhat of an email rampage as of late, with many customers who email him getting a (brief) reply to their questions. One such case, reported by The Unofficial Apple Weblog, has revealed that the iPhone OS will be getting a feature requested for since its initial release: a universal email inbox.

The emailer in question, one Julio Rodriguez, asked Jobs if the iPhone will ever get a universal email inbox to help manage multiple email accounts at once, instead of having to switch between them. Jobs answered with nothing more than, "Yep," which leads one to assume that the feature will make its debut in the iPhone OS 4.0 (which will most likely be released in a few months), or possibly in a release of the mobile operating system which could coincide with the launch of the iPad on April 3.

Apple has slowly but steadily remedied the common complaints about its mobile device range since the initial release, with copy & paste functionality implemented last year, and other tweaks made as time has progressed. For those skeptical about the authenticity of the email, a screenshot of the headers was included, showing the email client (Mail on the iPad) and mail servers used, both giving strong evidence that Jobs was indeed the sender.

It's an odd thing to see Steve Jobs give away upcoming features to Apple products, though if the email is to be trusted, expect to see this long-needed improvement soon. 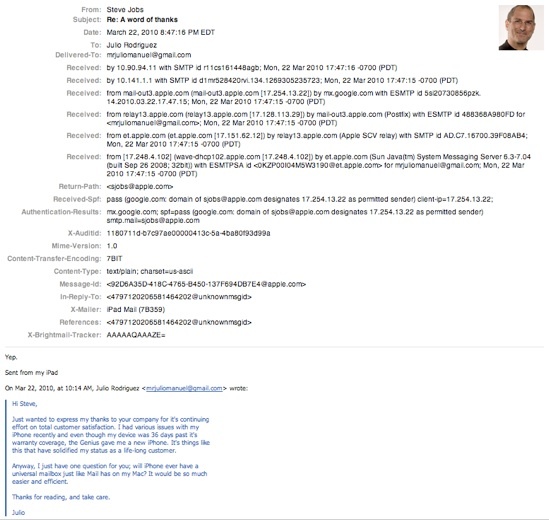