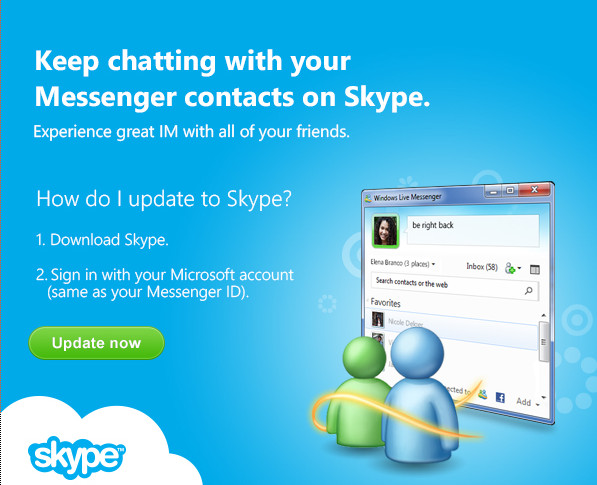 When Microsoft announced that Skype would become the company's premier messaging service and that MSN/Live messenger would be replaced with it, the logic behind the move made a lot of sense as it had two messaging platforms and merging them into one service would be easier to maintain. What was more surprising too, was how quickly Microsoft was planning to discontinue the MSN platform as the company has traditionally been quite slow to phase out products.

While we love the new cadence that Microsoft has been showing with rapid updates and increased refresh rates for key services, the Skype/MSN service merger has not been without issue and it's causing me to lose faith that the platform is hitting primetime starting April 8th.

Here is the issue that has been plaguing me and many others who use both MSN and Skype: messages from MSN to Skype users are getting lost, well, not lost as in they are never seen again, but lost in transmission and they take a loop around the arctic circle before arriving at their destination. For example, I chat frequently with our lead designer, @timan25, on MSN/Skype. I am on Skype, he is on MSN, and our messages have frequently arrived so late, that it's typically the next day before he is even aware that I responded to a question.

This is not an isolated incident, I have had issues talking with @maryjofoley on Skype/MSN (she uses Trillian for messaging) where she will send messages to me and they will not arrive for several hours. One incident occurred yesterday where her messages were showing up on my Skype iOS client but not on my desktop (Windows 8) client. The messages eventually made their way to my Windows 8 client after nearly four hours of waiting.

Now, the delay does not happen all the time but it happens frequently enough that my confidence in the platform is beginning to waver. There are other issues as well when you merge your MSN account with Skype such as contact duplication but those are only minor annoyances for those who had the same contacts on MSN and Skype.

The bigger issue here is what is happening to these delayed messages. All of the other issues with the merger have not provided any functional decline in the use of the communication tool, but this message delay bug is making it difficult to trust the platform. I am not alone with this issue as a quick search on Google pulls up hundreds of results for the same problem.

One of the results of the delayed messages is that if you get quite a few lost in space, when your client does sync back up, you get bombarded with messages, sometimes in the middle of the night. A few weeks back I had 100+ messages sync to my phone while sleeping. As you can imagine, when your phone gets bombarded by over 100 messages, it makes quite a racket while sitting on my nightstand and makes for an unwelcome disturbance in the middle of the night.

With the full transition starting April 8th (minus the API discontinuation which will happen in the near future) and the delayed message issue still heavily persistent, we begin to question if the product is actually ready for the transition.

We hope that Microsoft can resolve the issues quickly as I love Skype and use it every day to communicate with friends and co-workers but until the delayed message issue is corrected, it becomes an unknown variable if the person you are trying to communicate with will receive your messages.