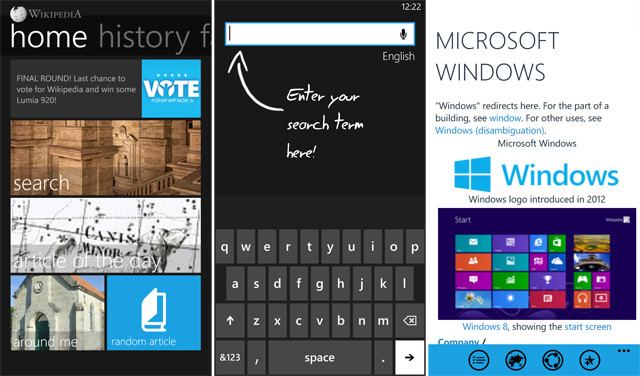 Hot on the heels of Netflix updating its Windows Phone app to include support for devices with 720p screens, Rudy Huyn has updated his third-party Wikipedia app to do the same, along with full Windows Phone 8 support.

Huyn's app, which is now version 2.0, was updated Saturday to feature support for Windows Phone 8 devices, including 720p resolutions, live tiles, voice command and speech recognition, and NFC sharing. Additionally, the app's performance is noticeably faster on Windows Phone 8 devices – it starts up, transitions between menus and searches quicker than it did prior to the update.

The app, which is now version 2.0, is currently a finalist in Microsoft's Next App Star competition, where it's up against the ProShot camera app. If Huyn's app wins, it will appear in an upcoming Windows Phone commercial from Microsoft. Voting ends at 11:59 p.m. PST Monday. In addition to helping decide the winner of the contest, individuals who vote will have a chance to win a Nokia Lumia 920.

Wikipedia is one of the best-rated apps on the Windows Phone Store, with a rating of about five stars.