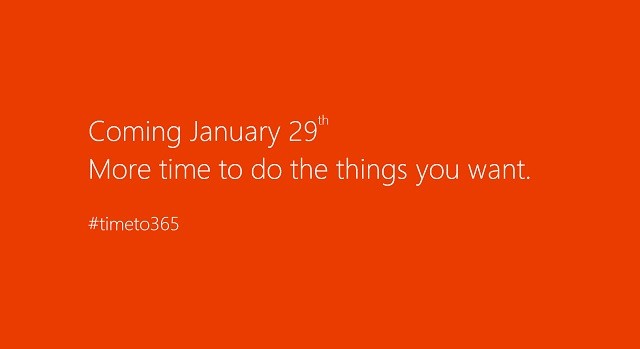 Everyone who has been following Office news this past week would already know that January 29th is the day for the retail Office 2013 release, but a new teaser website posted by Microsoft themselves has confirmed our thoughts. Titled "Time to 365", Microsoft is stating that their Office 365 subscription service will be coming January 29th, undoubtedly alongside the retail boxes for standard Office 2013.

For regular consumers, Office 365 will start at $99 per year with the basic set of applications (Word, PowerPoint, Excel, OneNote), while you should be able to grab a non-subscription version of Office 2013 for $139. There are also a variety of other SKUs on offer, including a full blown Professional Plus suite (for volume licensees only) that will cost $499.

The Office Twitter account has also posted up some teaser images from an event that they're planning, which looks like it will be hosted in Bryant Park, New York City on January 29th to launch Office 2013.

More time to create the things you want. Coming to @bryantparknyc on 1/29#Timeto365 twitter.com/Office/status/…

Imagine, more time to do the things you want. Coming to @bryantparknyc on 1/29 #Timeto365 twitter.com/Office/status/…

Source: Microsoft via: WinBeta | Thanks for the tip, JonesTheGreat