How time flies. Ten years ago today, Windows XP released to manufacturing, and if it wasn't for the fact we had changed over from one database to another, we could recall our coverage of Microsoft deploying a helicopter to take the gold master build of Windows XP to Dell and HP, among others. Neowin's coverage a month later, when XP was released to the world, is however still available for reading.

On August 24th, 2001 Windows XP was released to manufacturing. A huge step forward for Microsoft - finally they had a consumer operating system based on the NT kernel. There was a small ceremony during which Bill Gates and Jim Allchin signed off the 'gold code' in front of journalists, then placed it into a briefcase and had it flown off in a helicopter to bring the new OS to the OEMs. The plan was to make the OS available to the general public on October 25th, with a major launch event in NYC. Unfortunately for MS, two things happened: 1. The attacks of September 11th, as a consequence of which the launch party had to be scaled down massively, and 2. this: 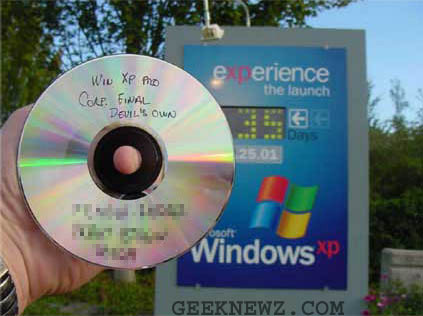 Users had Windows XP in their hands much earlier than planned. Can we have a show of hands of those who used the devils0wn release back then? That's what I thought...

Windows XP quickly became a success, running on up to 80% of all PCs at some point. It also came under attack by malware - a problem which made Microsoft focus their efforts on the 'Secure Computing' initiative, the result of which was Windows XP Service Pack 2.

Even today Windows XP still runs on approx. 40-50% of all PCs (although that percentage is inflated by the market share it still has in countries like China). Even on a technical forum like Neowin there are still those who voluntarily use Windows XP. To each their own I guess - personally I've long relegated XP to virtual machines.

Happy Birthday, Windows XP. You've been mostly good to us, Sasser et al. notwithstanding. It is time for you to retire though and make room for your more modern successors.

Do you have any Windows XP memories? Please feel free to comment below.

Thanks to Mephistopheles for this article, which was submitted in our forum earlier today.