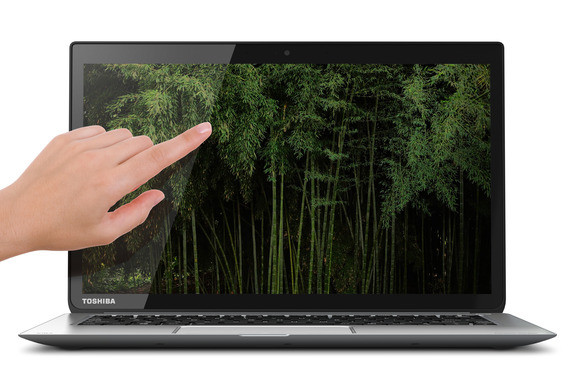 Today, Toshiba has taken the wraps off a brand new Windows 8 ultrabook called the KIRAbook, the most impressive aspect of which is the 13.3-inch 2560 x 1440 display that rivals the Retina MacBook Pro and the Chromebook Pixel in terms of pixel density (at 221 PPI). Aside from the impressive display, you'll also get a decent set of specs including up to Intel Core-i7 ULV processors, 8 GB of RAM and a 256 GB solid state drive.

Three KIRAbook models will be available at launch, two of which feature Intel Core i5-3337U and i7-3537U processors respectively, and Toshiba also says the ultrabook will be available in touchscreen and non-touch models. The machine is made from "A291" pressed aluminium with a "honeycomb-base" - Toshiba says this is 100% stronger than normal aluminium alloy - which keeps the device very light at 1.17 kg (2.6 lb), and thin (17.8mm or 0.7 inches).

The KIRAbook is the first Windows 8 ultrabook to feature a high-density display, so naturally it'll be compared a lot to the Retina MacBook Pro with its 2560 x 1600 display. While the power of the KIRAbook isn't quite at the same level of the MacBook, with Apple opting for full-powered Intel chips as opposed to ultra-low voltage models, it's both lighter and slimmer.

May 12th is the launch date of the KIRAbook in the United States, where it'll be offered at Best Buy, Amazon, B&H, Adorama, the Microsoft Store and direct from Toshiba. The base model will set you back $1,599, so it's not exactly cheap, while the mid-range with an i5-3337U CPU will cost $1,799 and the i7 model will cost nearly $2,000. Unfortunately there are no images of the ultrabook at this stage, but when we find one we'll update you.