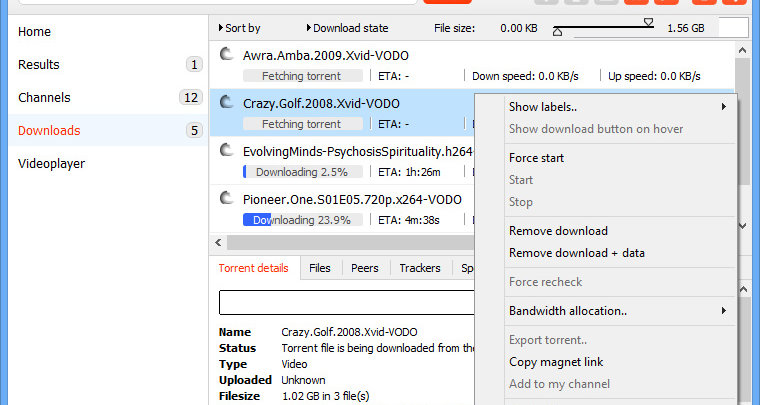 The most recent version of a BitTorrent client known as Tribler was released on Thursday, offering anonymity to its users through the Tor network which is built into their client. Using the Tor network allows users to share and publish files without having to worry about their IP address being made public to the rest of the world.

The team of researchers at Delft University of Technology have found a way to address the problem of BitTorrent services like ThePirateBay from being shut down. With Tribler, they've developed a client that doesn't rely on central servers. Instead, it's been designed to keep BitTorrent alive, even when all torrent search engines, indexes, and trackers are pulled offline.

While the BitTorrent ecosystem is filled with uncertainty and doubt, researchers at Delft University of Technology have released the first version of their anonymous and decentralized BitTorrent network. "Tribler makes BitTorrent anonymous and impossible to shut down,"

In an interview by TorrentFreak, Professor Poulwelse, the lead researcher of the Tribler client goes on to say:

“Recent events show that governments do not hesitate to block Twitter, raid websites, confiscate servers and steal domain names. The Tribler team has been working for 10 years to prepare for the age of server-less solutions and aggressive suppressors.”

Thorough testing of the anonymity feature earlier this year has allowed Tribler to now build it into the latest release with end-to-end encryption. Tribler implements a Tor-like onion routing network that hides who is seeding and sharing files. Users can customize a number of features, including the number of "hops" the client uses to increase their privacy.

“Tribler creates a new dedicated network for anonymity that is in no way connected to the main Tor network. By using Tribler you become part of a Tor-like network and help others become anonymous. That means you no longer have any exposure in any swarm, either downloading or seeding.”

The obvious downside to the increase in anonymity is higher bandwidth usage. Users who become proxies end up relaying the transfers of others. Furthermore, users who "leech" off of others will end up causing slower transfer speeds across the network.

“We are very curious to see how fast anonymous downloads will be. It all depends on how social people are, meaning, if they leave Tribler running and help others automatically to become anonymous. If a lot of Tribler users turn out to be sharing and caring, the speed will be sufficient for a nice downloading experience,” said Pouwelse, during the interview with TorrentFreak.

Also reported was the fact that after the Pirate Bay raid last week, Tribler has enjoyed a 30% increase in users and that they hope this will continue to grow during the weeks to come.

How many of you Neowin readers are already using the Tribler client? If it's your first time hearing about it, will you be making the switch?

Update and Warning: Because of the nature of the system Tribler employs, users may receive notices from their ISP for content that they haven't downloaded personally. The tracking companies may not see what you've actually downloaded, but they can in some cases see what traffic you transfer to others (via the scenario when you have become an exit node). Being an exit node essentially means that you are the last person between hops and that your IP address can be easily intercepted at that point.

There is currently no method of preventing yourself from being an exit node if using the anonymity feature of Tribler. When using this feature, it would be wise to use a VPN if you are using Tribler to give you an extra layer of protection even if you are downloading completely legitimate torrents.

In addition, a Tor/cryptography expert has warned that Tribler may have some potential flaws in its current implementation.