I have been through many headsets in the last few months. Some have been very poor, while others have been great but had a few minor niggling issues. Here today I’m covering the top-end Turtle Beach EarForce Call of Duty: Ghosts – Phantom headset. Despite this being a Call of Duty-branded headset, it is essentially a PX51 Headset. So if you have been looking at that headset, everything here in this review applies to that model too.

Promotional blurb
Strike fear in the hearts of your enemies with the Call of Duty® Ghosts Ear Force™ Phantom Limited Edition Gaming Headset. Armed with interference-free, Dual-Band Wi-Fi Wireless and a powerful, programmable Dual-Stage Audio Processor for immersive Dolby® Digital Surround Sound. With up to 15 hours of continuous play from the rechargeable battery, you’ll play longer and rise to the top of the leaderboards even faster.

Rechargeable Battery
Built-in rechargeable battery delivers up to 15 hours of continuous play. You can even charge while playing.

Music & Gaming Together
Take advantage of Bluetooth and stream your favorite tunes while you play or take phone calls and never have to leave the game.

Call of Duty Ghosts Voice Prompts**
Recorded by the actual voice actors from Ghosts, announce when the headset is powering on, pairing, battery is low, and more.

Comfortable & Noise-Isolating
Memory foam cushions fit comfortably around your ears to block out noise and distractions.

Customizable Audio Presets*
New Call of Duty: Ghosts chat and game audio presets to hear the game like never before. 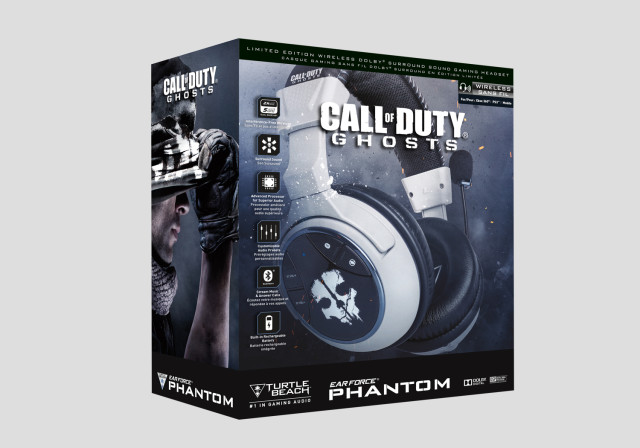 As expected, the Phantom Headset is easy to get up and running. You connect the transmitter via USB to one of your free ports on your games console and then run the included optical cable to the optical out port on your Xbox One, 360, PS4/PS3 or PC. Depending on how you run sound from your console, you may need to adjust some settings on your machine to get the audio to come out. This isn’t difficult and is explained in the instruction manual in very good detail.

Once you have sound coming out of your headset you can setup chat, the mic is included and can be attached or removed at any time. For the PlayStation 4 and Xbox One, you will need to run a cable from the headset to the game pads.

As I have made clear in previous reviews – this is due to the way Microsoft and Sony have done things, it isn’t truly wireless when attaching a mic. If you have a PlayStation 3 then you will be fully wireless as the headset transmits voice chat via Bluetooth to the console and it worked perfectly during my tests.

On the Xbox One, you have good quality audio via the mic, but you have to buy the Microsoft Xbox One Stereo Headset adapter, which adds to the cost of the overall package; this isn’t Turtle Beach’s problem though - it was a Microsoft decision. The PlayStation 3 uses Bluetooth audio for the Mic which means we are completely wire free, but this comes at a cost of poor audio quality.

Despite having an RF Transmitter like the previous PX4 headset I reviewed, this transmitter is different and in my opinion, a better design. It is upright and on a stand and contains a hook which you can put your headset onto when not using it. It’s all very neat and tidy and makes a difference. 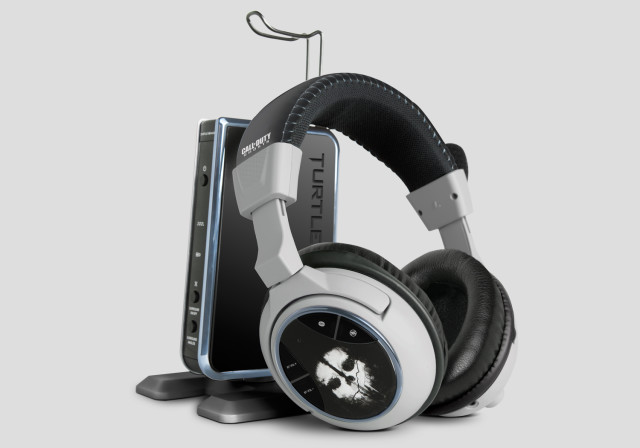 As expected for such a premium headset, the Phantom feels very good on the ears. I have played numerous games on it on the Xbox One, PS4, PS3 and more for many hours and hardly notice they are there most of the time. One of my complaints in my review of the PX4 headset was that sound leaked a little easily from the headset, well I’m glad to say that isn’t the case here. The foam cushions seem to make all of the difference with very little leaking out even when my wife was sitting next to me while I was gaming.

My first charge of the headset took a few hours before it was fully charged and ready to go. You can use it while it is charging but I preferred a full test from the get-go for the review. From my first test I managed to get around 13 hours from a full charge.

Sound quality has been excellent throughout my time with the Phantom headset, with the Dolby Surround Sound working superbly across a wide-range of games that I have been playing. The Phantom also has a number of other Surround Angle settings which can adjust where the sounds are coming from depending on what you prefer by changing the front and rear angles. The full list of titles I have played on the Phantom Headset are below:

The Phantom has a number of different selectable modes for Gaming, Movies, Music and Chat. They range from boosting the bass to hearing dialogue better. They work well, though personally I prefer the default setting each time, though many people will like the option to change things to the way they like it.

There are also a huge number of custom presets which you can download on the Turtle Beach website if you so wish. They can easily be transferred to your headset via the EarForce Audio Hub which can be downloaded. It can also be used to update your headset's firmware. 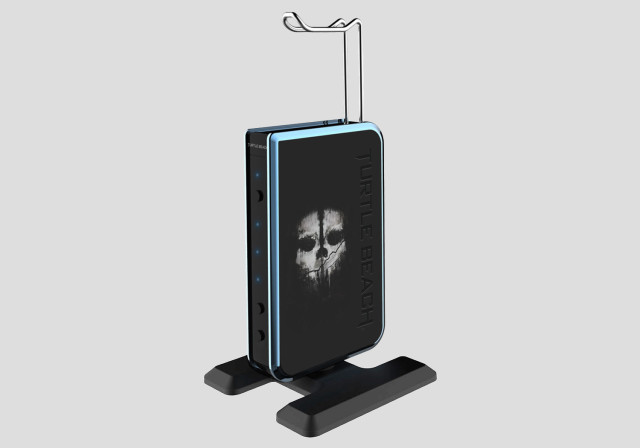 The best news from a sound quality point of view came as soon as I put the headset on. There is no audible hiss, unlike on the PX4 headset and this, combined with the great sound quality, great surround effects and decent mic chat, meant that it almost instantly became my favourite headset within a very short space of time.

As this is a Bluetooth headset too, you can connect it up to your mobile and then answer calls or stream music to the headset whenever you want to. It works well and although answering calls when gaming might seem a little strange at first, when you play too many games like I do and miss calls, it’s not a bad feature to have at all.

Overall the Phantom headset is one of the best, if not the best headset that I have used. The Dolby sound works really well and immerses you within your games and movies and the option to change the surround angles is another welcome feature for those of us who like to tweak to get the best out of our hardware.

The RF Transmitter is also a much better design than I have previously seen, it makes a difference being able to tidy away the headset neatly on top of it rather than leaving it lying around. Finally though, having a headset with no sign of hissing is great news for me and many others who pick up on the slightest bit of interference. So if you are into your gaming and love good quality headsets and surround sound, this is one of the best ones you can get right now.