When Microsoft announced the Xbox One last year, it heavily promoted the television features of the device. Microsoft actually had a grander vision for television, however, one that appears to have ultimately been scrapped.

Prior to Microsoft’s Xbox One reveal, reports surfaced that the company wouldn’t unleash one new Xbox console, but two: The Xbox One as well as a set-top box more focused on TV content than gaming. Further reports indicated Microsoft wanted to create its own subscription TV service, potentially called Xbox Live Diamond (a step up from Xbox Live Gold), but problems with channel operators torpedoed the plans. The Xbox One still ended up with significant television capabilities, including several streaming apps and the ability to control existing cable and satellite set-top boxes, but what shipped lacked the grandeur Microsoft had planned.

On the computer front, Microsoft has practically abandoned TV entirely. The company’s Windows Media Center software is essentially dead, as it now only exists as an add-on pack for Windows 8 Pro and lacks significant updates since its Windows 7 iteration. While third-party TV tuner software still exists, most lack the quality found in Media Center, which mostly received raved reviews when it launched. Part of the problem can be placed on consumer habits, as TV tuners haven’t exactly become a hot commodity, but the market appears to have shifted to an area where Microsoft can still compete – and perhaps compete even better: hardware.

As Microsoft toils with uncertainty for its TV plans outside its new console, its competitors are champing at the bit for a place in the growing field. Apple TV is expected to receive a major update in the near future, with gaming and subscription features rumored in the pipeline. Google is expected to announce a massive overhaul of Android TV, with gaming capabilities, a refined interface and dedicated apps. Even Amazon is entering the fray with its recently announced Fire TV, a set-top box based on Android with apps, gaming and streaming services tied in.

The set-top box market is growing, and it's also ripe for Microsoft's taking.

If the combination of apps, light gaming features and service integration sounds familiar for a TV set-top box, it should: That’s exactly the kind of device Microsoft was considering launching alongside the Xbox One before getting cold feet.

Xbox TV would have been a predecessor to Fire TV and the reported overhaul of Android TV, with the ability to play casual games and stream multimedia content from an operating system based on “the core components of Windows 8.” According to some reports, the device would have even featured an integrated Kinect sensor, allowing voice navigation and video chatting – the former of which will be offered by Fire TV, but the latter of which no major player is even attempting in the set-top box field.

Microsoft’s reluctance to take a game-changing step into the TV field makes sense, given that channel operators and content producers are notoriously cutthroat when it comes to retransmission agreements and licensing content. As more technology companies enter the set-top box field, however, it’s clear they’re willing to start small, with third-party streaming services, first-party content services and apps serving as the overwhelming majority of entertainment features at the moment. So the question remains: Why not enter the field and strike while the iron’s hot? 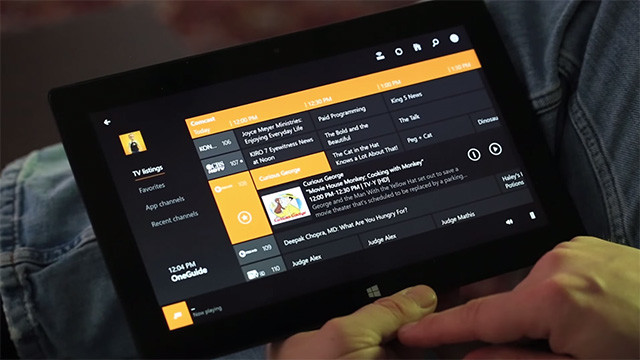 Office for iPad and free Windows licensing for small-screen devices show the importance of services to Microsoft. The Redmond giant is clearly focused on getting users tied into its infrastructure, and sometimes doing so requires gambles.

While Amazon can offer its voice search for Fire TV, Microsoft can offer Cortana with Bing integration. While Google and Apple can offer the Play Store and iTunes, respectively, Microsoft can offer its Xbox stores. And on the gaming front, none of Microsoft’s competitors can offer an infrastructure that rivals Xbox Live. If Microsoft wants to go further, it could integrate a Kinect sensor in the device for video calling, as was reported in 2012, and tie in Skype as a service.

Even on the interface front, Microsoft seems prepared for a set-top box. Its Metro design language may have been met with a mixed response from PC users, but it’s hard to argue that the interface’s tiles aren’t appealing on a TV. It’s no surprise that Google’s purported Android TV design eschews icons in favor of tiles similar to those found on a Metro interface – it’s simply a better fit for a screen that people sit several feet away from. Programming listings also fit perfectly within the design, as Xbox One’s OneGuide has proven.

Perhaps the biggest reason why Microsoft seems poised for an entry in television, however, came at its recent Build 2014 developer conference. There, Microsoft announced its universal app initiative, allowing developers to make Windows and Windows Phone apps for a combined store with greater ease than before. Xbox One app and game development will benefit from the initiative as well, which will surely encourage developers to release their work across the entire Windows ecosystem.

Microsoft seems uniquely qualified in the tech industry to make a TV set-top box. Typically, companies face many questions when entering a new market segment. The only major question Microsoft faces for a set-top box, however, is why it hasn’t made one yet.