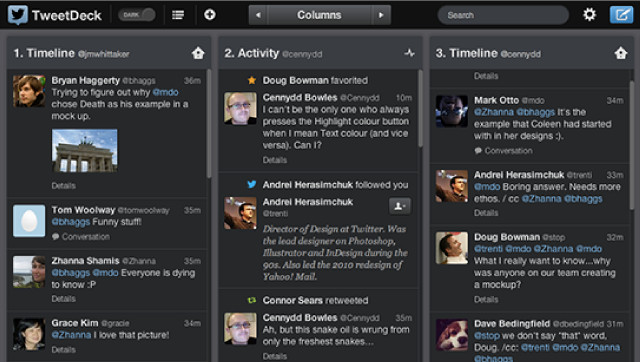 TweetDeck is one of the more popular Twitter clients out there and offers a comprehensive and customisable dashboard that also integrates Facebook updates. The software was actually developed in London by Iain Dodsworth, who sold his company to Twitter in May 2011 in a deal estimated to have been worth around $40m USD (£25m GBP).

Since then, TweetDeck has remained a limited liability company in its own right in the UK, operating as a subsidiary of Twitter UK Ltd. Last month, both companies were fined £375 ($594) each by Companies House – the executive agency of the British Government which manages the registration of UK companies and their records – for repeatedly failing to file any accounts since the TweetDeck purchase in 2011.

While Twitter UK Ltd has since filed accounts for 2011 – revealing that the company had booked a curiously low annual profit of just £16,500 – TweetDeck has still not done so, and has since been fined a further £750 ($1188) as a result. But as Sky News reports, Companies House has now written to the company's directors threatening TweetDeck Ltd with imminent closure. The letter, dated 22 January 2013, reads:

The Registrar of Companies gives notice that, unless cause is shown to the contrary, at the expiration of 3 months from the above date the name of TweetDeck Ltd will be struck off the register and the company will be dissolved.”


When a company repeatedly fails to file the documentation that it is legally required to submit under the UK's Companies Act 2006, it is standard procedure for Companies House to pursue this course of action; in such events, it is procedurally assumed that the company is operationally inactive, and notice is given to inform directors that that status will soon be formalised; any company continuing to operate once struck off the register would face prosecution.

Now, before we get too carried away here, there’s no indication that the TweetDeck client is going to be shut down any time soon. Indeed, when asked the possibility of the UK subsidiary being shuttered, a spokesperson from Twitter told Sky News that the “TweetDeck team has been steadily innovating and improving the product, and we expect to see much more of that to come” – which appears to indicate confidence in the continued existence of both the UK company and the software itself.

But there could be consequences for Twitter’s global CEO, Dick Costolo, and the company’s general counsel, Alex Macgillivray - who are named as TweetDeck Ltd’s two directors - if action isn't taken to rectify the situation soon. The UK Companies Act 2006 holds directors personally accountable for their obligations to the company, and Companies House is quite clear on this:

If the Registrar believes that a company is no longer carrying on business or in operation, he could strike it off the register and dissolve it. If this happens all the assets of the company, including its bank account and property, generally become the property of the Crown.

Failure to deliver documents is a criminal offence. All the directors of the company risk prosecution. On conviction, a director could end up with a criminal record and a fine of up to £5,000 for each offence. This is separate from the civil penalty [the £375 and £750 fines already issued] imposed on the company for late filing of accounts.”


TweetDeck might want to consider getting their act together and getting that paperwork filed quickly, before things get to that stage.