Twitter has made another major move in its mission to improve its user experience by adding the ability to share lists of blocked users.

Now, any Twitter user can export and share their block list - that is, the accounts they've blocked and muted over the years - with other users who may be facing similar harassment from trolls.

This is especially useful, according to Twitter, between people who share a similar community, such as groups of like-minded ideologues. Those who use the platform to discuss their political and social views, and who may face stalking and harassment from others who disagree, will especially benefit from the ability to share block lists, as well as famous (or infamous) Twitter users who face a high volume of "unwanted interactions." 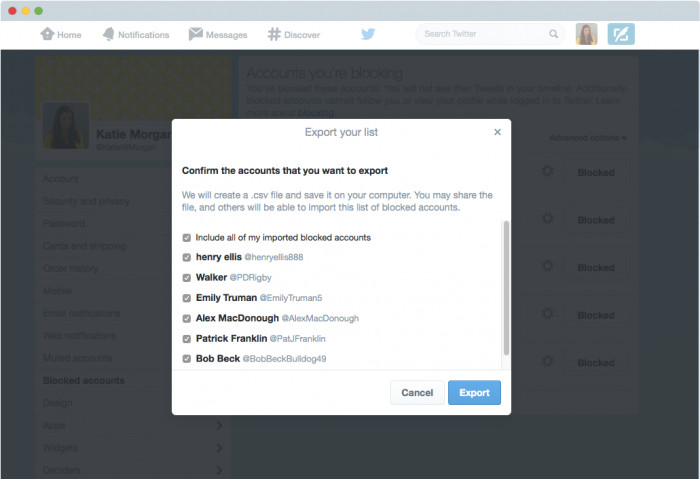 Twitter's block list update will allow users to import other block lists into their account, and block multiple accounts all at once, instead of doing so individually. The site explains how to share block lists on their official blog:

To export or import a list of blocked accounts, navigate to your blocked accounts settings on twitter.com. Click on the advanced options drop-down menu and select the action you want to take.

To download a list of your blocked accounts, select the export option and confirm the accounts you want to export.

Twitter is planning further enhancements for user safety following the update too. "We’re also working on additional user controls," said Twitter User Safety Engineer Xiaoyun Zhang in the blog post on the update, "and we look forward to sharing more information about those in the near future."

Earlier this year, Twitter finally revamped their internal approach to harassment on the platform. In February, Twitter CEO Dick Costolo expressed shame for their previous approach to harassment, saying the company would begin "kicking these people off right and left and making sure that when they issue their ridiculous attacks, nobody hears them." And in April, Twitter announced that they would further crack down on abuse by banning accounts for promoting violence.

With an apparent culture shift in the company's approach to user safety and harassment, we can look forward to more feature and policy updates from Twitter - and potentially other major sites - in the future.