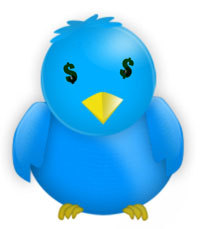 Some have previously questioned as to how Twitter gain enough revenue to stay afloat despite the 300 million registered users on their site. It appears though, that they're planning on making more money soon by introducing advertising within the most popular streams on the social networking site.

The Financial Times reports that the promoted tweets, which are paid for by the advertisers, will be more prominent in the main stream of updates. In practice this could mean a promoted tweet which was posted an hour ago, would show up next to a one minute old tweet. This is a major shift from the unobtrusive advertising that users have perhaps been used to over the past year. Back in April 2010, Twitter began experimenting with promoting tweets and some companies such as Coca-Cola have found success in the scheme.

Twitter has recently been forced to look at how to gain more revenue from the site, which has several million unique views each day. Given that Facebook has found success in its advertising program, Twitter have been pushing for new ideas as to how to increase their profit margin. The site already uses the 'Promoted Trends' model which costs $120,000 per day, but it was only recently $25,000 to $30,000.

Back in March, the company made a blog post in which it stated "we are always talking with marketers about ways they could potentially get more out of Twitter. Some of these discussed concepts may materialise; others will not." In addition to this, one agency executive familiar with Twitter's plans has also mentioned that they feel the company is slowly 'getting it together'. With this in mind, this is perhaps one of the first signs users will be seeing in a more commercialised Twitter.