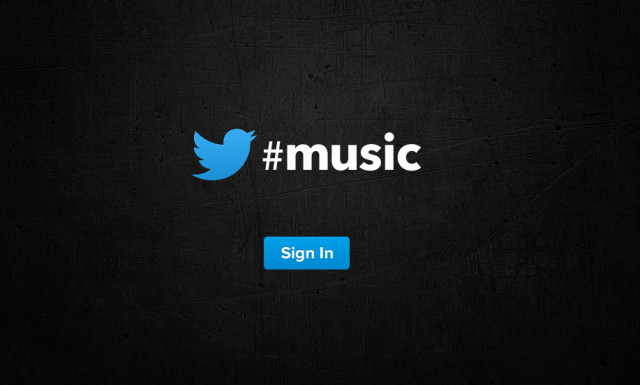 It looks like Twitter is about to branch out into a new sphere today: Music. While the service is popular with musicians (the top two most followed accounts are owned by Justin Bieber and Lady Gaga), Twitter have never tapped into the music industry in any way.

A report by AllThingsD, which is corroborated by The Next Web, suggest that Twitter will release a new Music app today. AllThingsD cite several sources, who indicate that the app will offer artist and track recommendations based on who you follow and interact with, giving a truly personalised experience. Users will be able to listen to clips of music inside the app, using existing services such as SoundCloud and iTunes. Doing this means that Twitter can avoid complex licensing agreements with music labels. The app also allows video playback via VEVO, the popular music video service owned by Universal Music and Sony.

Last year Twitter purchased ‘We are Hunted,’ a music discovery service that was available on Spotify. Only today have the two made the announcement official, with We are Hunted saying: "[We] will continue to create services that will delight you, as part of the Twitter team." A tweet from We are Hunted also confirms the acquisition:

Seacrest went onto say that the app included "artists [that] are trending" similar to the Trends feature on Twitter. We are Hunted's services have obviously been put to use, as the Music app shows "up and coming artists." The Next Web reports that the app is expected to include four sections: Suggested Music, a #NowPlaying that "tracks the hashtag among followers", Popular and Emerging. Twitter can use the data they already have - following, #NowPlaying tweets, interactions with the artist - to suggest emerging artists, similar to the We are Hunted service on Spotify (which has now been shuttered).

The Verge points to music.twitter.com, the home of the new music service on the Web which is currently displaying a place holder for the launch (top image). Stephen Phillips, founder of We Are Hunted, has recently been tweeting songs from the "Trending Music Web," which could be the Web-based portal for Twitter Music. The Verge notes that the tracks lead to links from Rdio and SoundCloud, reinforcing AllThingsD's information that the app will use external sources for music. 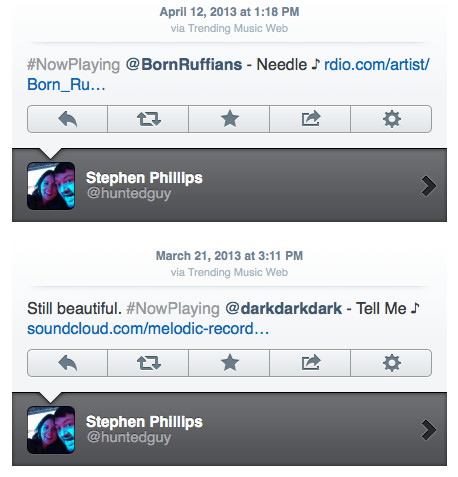 TechCrunch notes that Twitter Cards could play a large part in the implementation of the #music service. If a friend tweets a link to a song, it will open in a Card and you can sample that track. Record labels will be very pleased with the simplistic sharing option. If Justin Bieber tweeted that he was listening to a new "up and coming" track, millions and millions of his fans would purchase the song, creating more and more coverage.

The timing of the release is also perfect, as the Coachella Valley Music Festival is about to start, bringing together some of the biggest names in music to one place. Twitter may be looking to leverage the festival to launch Twitter Music.

Update: In the "Apps" section of Twitter settings, a new application can be found: "Trending Music Web". As you can see in the screenshots above, "Trending Music Web" is the application used by Twitter #music to broadcast what you're listening too, and it may even be the backend of the service. The application comes with the description: "the web version of the trending music app," implying that there is an app counterpart and has the ability to "read and write" on the account. The plot thickens.

Source: AllThingsD, The Next Web, The Verge, TechCrunch | Images via Twitter and The Verge