Love ‘em or hate ‘em, advertisements are staples of the internet. It just doesn’t work without ads. But do they belong on your operating system? Canonical seems to think so, and they’re putting their money where their mouth is by shoving advertisements into Ubuntu 12’s Unity Dashboard.

For starters, try searching for an app on your system. Normally you’d expect to find apps and files, but now you’ll also be getting lots of other ‘helpful’ hits, namely shopping suggestions from Amazon. Good stuff, huh? 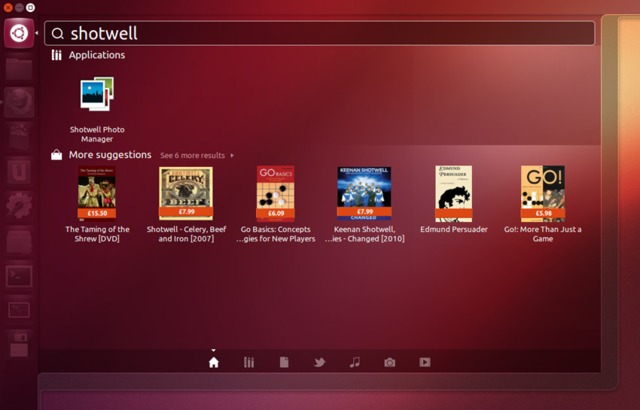 What about places where Amazon suggestions might actually be useful, like in Music Lens? No dice. Even though it’s highly unlikely that anyone is going to go buy something from Amazon when they really just want to check their mail, that’s the approach being taken here. Although suggestions in Music Lens have been improved from previous versions of Ubuntu, you won’t find any Amazon results here. That’s a shame, since they might’ve actually been, you know, useful.

The good news is that it’s a snap to get rid of the advertisements. Just open the terminal and run ‘sudo apt-get remove unity-lens-shopping,’ and you should be good to go. The real question to ask yourself is should you do it. Canonical says that including advertisements in Ubuntu will help them build a better OS by giving them more revenue to work with. What’s your take?

Thanks to Dale Williams for the tip