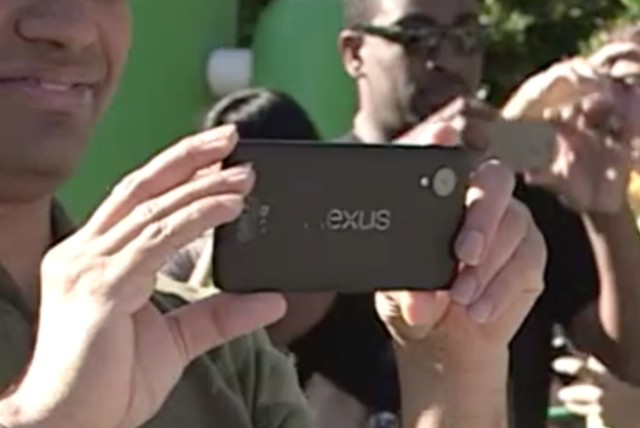 Google proudly unveiled Android 4.4 today but rather than the slice of key lime pie we had all been expecting, the name of the release Android KitKat after the delicious chocolate and wafer bar. The company released a few promotional videos, including one unveiling the new KitKat statue at Google headquarters. However, during the video a mysteriously unannounced Nexus device appeared in the hands of a statue enthusiast trying to get a picture.

The unknown device, as seen above, appeared in the video about 38 seconds in. Unfortunately, Google has since removed the video from public viewing, indicating that the leak is probably legitimate.

The device looks rather large. By its size it could potentially be a large smartphone or maybe a phablet. The Nexus branding on the back is pretty big too, as is the camera lens. Vic Gundotra, Senior VP of Engineering at Google, has previously hinted on his Google+ page that improved cameras would be coming to Nexus phones in the future. That supports the idea that the bigger lens on the Nexus the photo means better photo quality.

Whatever device this may be, it's unlikely the public will have to wait much longer for it. Since a Google employee clearly already has a working prototype that he uses to take every day photos, the mysterious gadget should already be near completion.