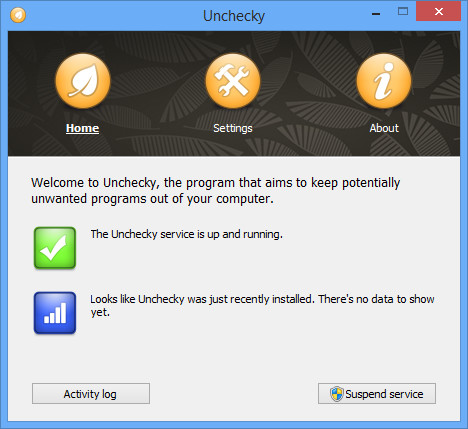 Tired of unchecking unrelated offers while installing software? Have you ever felt, while installing software, that the installer tries to push additional unwanted programs at all cost? Ever missed a checkbox, and spent hours afterwards removing adware? Ever opened your browser after an installation, only to find out that you have a new homepage, a new search engine, or even a new browser? Unchecky aims to keep potentially unwanted programs out of your computer.

Unchecky’s primary feature is automatic unchecking of unrelated offers, such as potentially unwanted programs, offers to change your homepage or your search engine. With Unchecky, these offers become opt-in instead of opt-out, i.e. they will be installed only if you explicitly choose you want them (you usually don’t).

Another important feature of Unchecky is that it warns when you accept a potentially unwanted offer. Installers often provide them as a natural part of the installation, so they can easily be accepted by mistake. With Unchecky, it’s less likely to accidentally accept such offers.

Unchecky is not an universal solution, and might not support installers which were not released yet. Thus, it’s worth noting that Unchecky updates automatically, so you don’t have to worry about running the latest version.