Sony has just announced a new patch for their Playstation 4 console. According to their post PS4 owners will soon be able to enjoy 3D Blu-ray films on their devices.

Ever since the launch of the new generation of consoles, both Microsoft and Sony have been struggling to add new features, or in many cases, to re-add features that were lost in the transition from the last-gen.

Now Sony, is announcing a new upcoming patch via Twitter. According to the tweet, PS4 owners will soon be able to use their consoles for playing 3D Blu-ray content. The upcoming patch is version 1.75 but there’s no exact timeline for its launch.

While a limited few will no doubt welcome this improvement, the majority of PS4 users are feeling frustration at Sony’s shifting focus in regards to its console. The company originally focused heavily on gaming, and benefited from great sales numbers as a result. But they seem to have now shifted towards TV and media consumption, a direction which many of its fans disapprove of.

Despite all of this, Sony’s PS4 is still selling in great numbers, so here’s hoping the company remembers what its primary focus should be and goes back to a gaming-first attitude.

Update: The patch is now out so users can go ahead and download it. Besides the 3D Blu-ray support a few other changes have been announced such as better audio support, minor UI changes and auto-downloading of featured content. 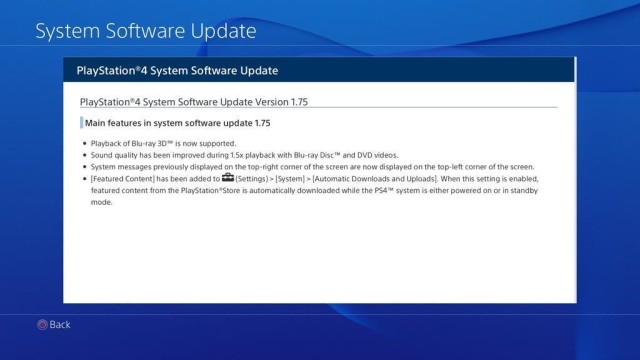