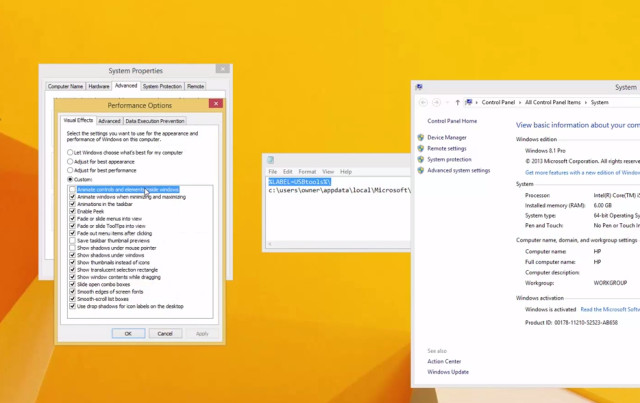 Microsoft's Windows 8 comes with many performance improvements over that of Windows 7 but it also includes animations that polish up the UI. If you can live without these animations, by turning them off, you can make the OS feel a bit snappier.

Sure, it's mostly a placebo effect seeing that the animations are only there to make transitions a bit smoother, but if you watch the video, you can see how by turning them off, the OS appears to be faster.

In the video you can see the animations that are being shut-off from the settings window at the top of this post including "Animate Windows when minimizing and maximizing" and "Animations in the taskbar". Your results will vary based on the specs of your machine and especially those of you with slower hardware, turning these options off should help improve your performance just a bit.

Windows 8 is now a bit over two years old, it was released to manufacturers in August of 2012, and it looks like its successor is right around the corner with Windows Threshold expected to be announced at the end of next month. While we don't know what or if anything Microsoft has done to improve performance under the hood, we would expect that Threshold should be on par or best the performance of Windows 8.

The video posted above was created by Warwagon and was first posted in our forums which you can check out here.