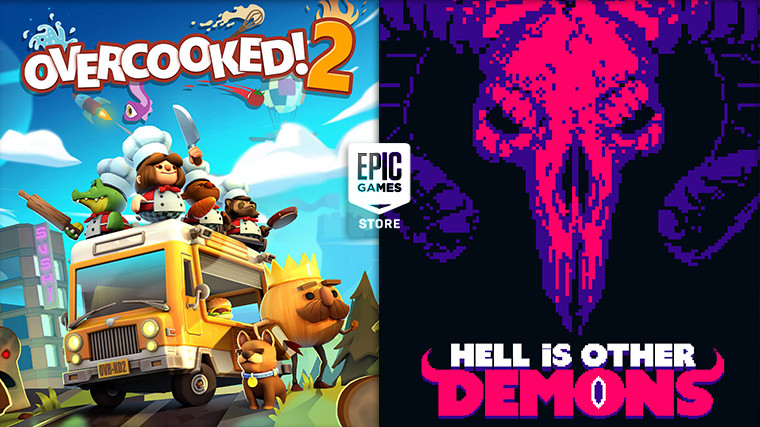 The Epic Games Store finished off its mystery freebies this week with Control being the final one, and returning to its regular giveaways, it is now offering Overcooked 2 and Hell is Other Demons.

The popular party game Overcooked 2 builds upon the original hectic cooking experience by adding online multiplayer. You will be cutting ingredients, dashing around unstable kitchens, and trying to complete dishes to satisfy all sorts of customers while losing your friends. Meanwhile, Hell is Other Demons is a bullet hell, rogue lite platformer, where you explore a retro arcade landscape filled with demons and bosses to take out.

The two games are free to claim on the Epic Store through June 24, and coming up next as the replacement freebies on that date will be Sonic Mania and Horizon Chase Turbo. For another giveaway, but one that's ending very soon, head on over to the DRM-free section below to check out the freebie from GOG.

The gaming bundle space expanded this week with Humble's new UK Games Collective Bundle, bringing in five games and a bonus item in its tiers.

It is not a very populated bundle. The first tier has Her Majesty's SPIFFING available for $1, and then it's straight to the second and last games rung where Warhammer 40,000: Sanctus Reach, Lumino City, Master Reboot, and The Ship - Complete Pack are available for the average price, which is currently at $4.48.

The third tier of the bundle only adds one more item, and it's an odd one: a one-month membership code for Old School RuneScape.

Don't forget this isn't the only gaming bundle in play right now, as last week's Out in the Open World collection with open world games and the Humble Choice selection with Civilization VI Platinum Edition as the headliner are still available.

It is time for another Steam demo festival, and that means hundreds of playable slices of upcoming indie games for you to try out.

Titled Steam Next Fest, this time the promotion will last through June 22. Over 700 games are available to try out during this period from genres all over. The Steam hub page, linked earlier, for the event has personalized recommendations, handy sorting systems, developer livestreams, and more.

That doesn't mean regular free events for released games have gone anywhere though. You can try out the Ubisoft tactical shooter Rainbow Six Siege until June 20 via Uplay. Adding to that, the WW1-set atmospheric shooter duo Verdun and Tannenberg, cooperative tower defense title Orcs Must Die 2, and the golfing experience PGA TOUR 2K21, are free-to-play this weekend on Steam.

The Steam Summer Sale is right around the corner, with it slated to open its doors on June 24 and run for two weeks straight. Usually, sales are a bit lacking due to its proximity, but that's not the case this time.

Meanwhile, this is also the final weekend you have left to use Ubisoft's $10 off coupon that applies across all games and DLC on its store. Use the code FORWARD at checkout to get the offer. With all that out of the way, finally we arrive at the handpicked big deals of this weekend:

GOG also has a giveaway running right now, and it is for the popular top-down drifting centered racing game Absolute Drift: Zen Edition. The title has open-ended free roaming maps with three game modes alongside challenges, replays, and more, all to get your perfect corner slides in order.

You only have a few hours left on the giveaway though, as the promotion is ending at 6AM PT.

The summer sale GOG store kicked off last week is still marching strong too, and new deals have joined in since then. Here's another highlights list of the DRM-free specials available: