In its short lifetime, the Xbox Music app for Windows 8 has improved by leaps and bounds. While the pre-8.1 Music app clearly suffered from a strict adherence to Microsoft’s “Modern UI” design guidelines (see below ) and a laundry list of other frustrating issues, the most recent iteration of the Xbox Music app seems to demonstrate that developers are actually attempting to address user requests and complaints. 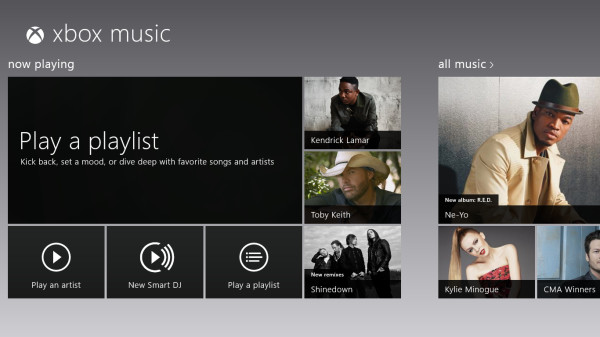 That being said, there are still a number of lingering issues (some major, some minor) that have yet to be addressed, issues that often render any attempt to fully rely on the Xbox Music app for all of your music needs a frustrating experience.

When playing music on my Lumia 920, I only have to press one of the hardware volume buttons to quickly access important media shortcuts such as play or pause and back or forward. The situation is largely the same on my laptop and Surface tablet. A press of the volume up or down buttons and the “now-playing” widget pops into view.

Attempting to access these controls with a traditional mouse and keyboard setup is a different story.

In the most recent version of the Xbox Music app, it is impossible to access the “now-playing” widget unless you have access to a keyboard with multimedia functions. As a desktop user, the only way to pause or skip a song is to navigate to the full-screen app and select pause or next track. As a writer that loves to listen to music while typing away, nothing is more frustrating than having to completely leave behind whatever I’m doing to simply skip a song. I could sacrifice a quarter of my screen space to gain quick access to the media shortcuts by “docking” the Music app to left or right side of screen, but I refuse to surrender all of my dignity to Microsoft (I already bought a new multimedia keyboard . . .) 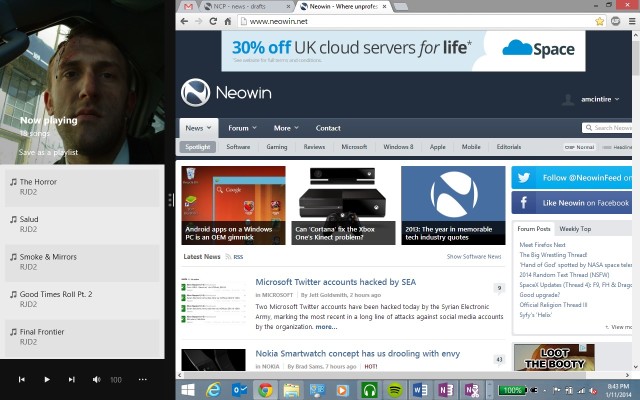 To add insult to injury, activating the “now-playing” widget on any Windows 8 device requires a user to execute a potentially unwanted command to access a desired one. Whenever I press volume up or volume down to activate the widget, I’m adjusting the volume whether I want to or not in order to skip a song. The Windows Phone developers, being the smart cookies they are, made it so that the function of the first press of the hardware volume key only brings up the now-playing info and leaves the device volume unchanged. Take notice Windows OS developers!

Xbox Music clearly lacks the social features of its competitors and even its predecessor, Zune.

With Spotify, I can create collaborative playlists that allow my friends and I to add songs to a single playlist over the course of weeks and months. Without leaving the Spotify desktop app, I can post a link to this playlist too on Facebook, Twitter, or Tumbler. I can also see what my Facebook friends are listening to. If I don’t want to see this information, I can simply right-click on their name and select “unfollow.”

In the official Xbox Music app, selecting a playlist and accessing the share charm offers me the following options. 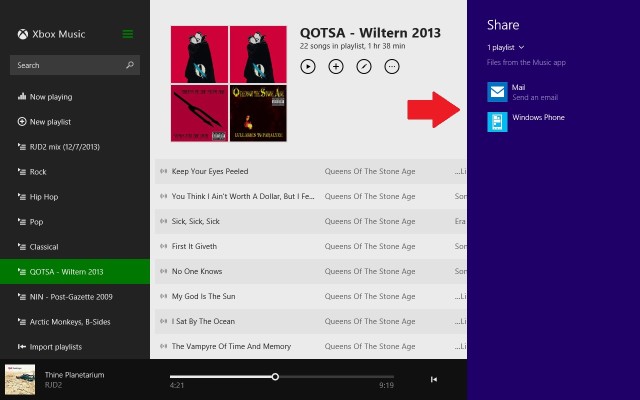 Oddly enough, the Xbox Music web app actually offers more functionality in this regard. When viewing a playlist, the web app provides a “share on Facebook” button that will post a link to Facebook that those with or without a Microsoft account can easily listen to. Very cool Microsoft! Just add it to the damn native app too!

While there are many other things I could complain about, the Xbox Music service, apart from the app itself, also offers a few benefits that have led me to continue to choose it over other music streaming options.

Xbox Music distinguishes between My Collection and Playlists

Spotify allows you to listen to anything it hosts in its catalog, but the only way you can catalog the music that you want to listen to is by adding it to specific playlists. Things can quickly become overwhelming as you start to create playlists for particular genres, artists, and other mixes.

Saying that Xbox Music is the best option among mediocre alternative isn’t exactly a flattering statement, but it is, at the moment, still true. The Spotify app is rarely updated, lacks the ability to play radio stations, and still crashes from time to time. Google Music is currently MIA and it appears that upcoming music services such as Beats Music will focus primarily on apps tailored for Android and iOS smartphones.

Hope on the horizon

Despite the frustrations that sometimes result from using the Xbox Music app, I still believe that there is hope for the future.

We know that Microsoft is capable of building music software that includes great social features (see Zune Media Player) and the company’s cozy relationship with Facebook suggests that we should expect to see further integration beyond what is currently available in the Music web app.

Lastly, the rumored ability to run “Modern UI” apps from the desktop, an addition that is rumored to be added in the upcoming Threshold update, would go a long way to addressing some of pitfalls of using Xbox Music on a daily basis.