It's a shame to see OnLive in the situation that it is. From looking at the comments around here, I can tell that a lot of people don't really appreciate just how much potential OnLive has, even if it is mostly unrealized.

And I'll agree, if you're content with consoles, or if you're happy with your gaming rig, streaming a game does seem a little pointless. But when you consider the potential it has to bring hardcore gaming to people who aren't your usual target audience, it turns into something very powerful, and I think it's time for people to recognize that.

Just imagine this. If you've got a decent internet connection, OnLive and similar services have the power to turn this into an awesome gaming rig: 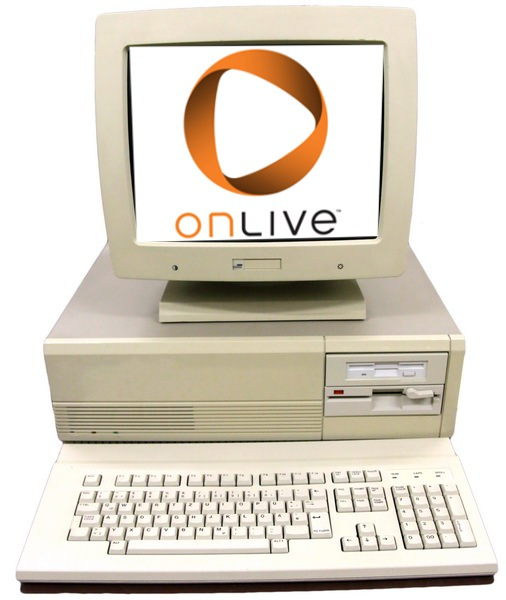 Alright, maybe that's a tad bit exaggerated, but you get the point. Since most people aren't running the kind of system it takes to run Battlefield 3, or even the original Crysis, on max settings, OnLive has the potential to bring those kinds of games to people who really don't want a dedicated gaming box, or just can't afford one. OnLive can turn every dumb terminal into a gaming system with the power of a data center behind it.

There's one more untapped market that's just waiting to be unlocked: tablets. I know a lot of people knock tablets as gaming devices, but I really do think that it'll eventually become more commonplace to see people using them for serious gaming. Right now, though, even as mobile devices get more powerful, developers don't seem very motivated to port their top titles to iOS or Android. OnLive, on the other hand, could easily burst onto the scene.

On the other hand, there's already an Android app out there (an iPad one was apparently developed and announced, but it's been MIA since then), and it hasn't exactly taken the world by storm. Part of that probably has to do with a lack of media attention, and the fact that Android tablets aren't exactly 'hot.'

There's one more advantage to streaming, and this one should be real interesting to those of you who are already gamers (presumably, that's everyone reading NeoGamr). Like I said earlier, OnLive is gaming with the power of the cloud behind it. Theoretically, it could harness a lot more processing power and memory than anything on the market today. That means that if developers really put their effort into it, they could even use streaming to go beyond the technical abilities of modern PCs and create something really amazing.

I think that it's very much in the interest of the industry to keep an eye on OnLive. Right now, things aren't exactly looking good, but there is a bit of good news: they apparently have some 'substantial funding' behind the service following the restructuring. Hopefully that means that someone's looking into the future, and realizes that streaming gaming really does have the potential to totally reshape gaming as we know it. I don't know when it's going to be ready for primetime (apparently not now), but trust me, when it is, it's gonna be big.