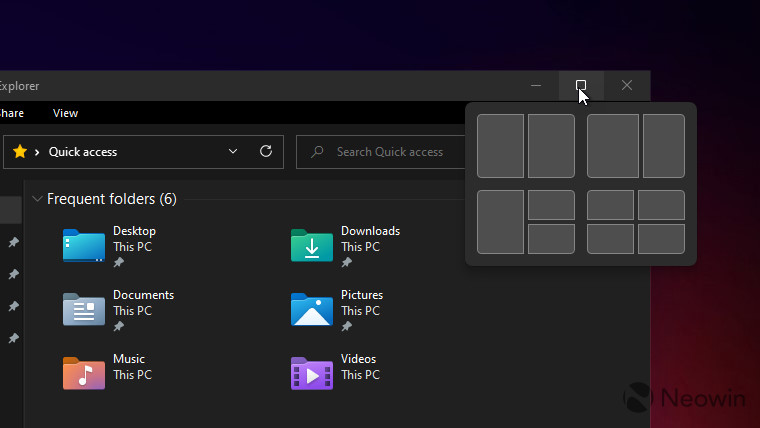 An early build of Windows 11 leaked yesterday and we've been taking it on a test run through our machines. Obviously there's a lot new to see that isn't immediately obvious, while other things remain the same as with Windows 10. However, as spotted by former Senior Editor for Neowin Tom Warren, Windows 11 now includes a very handy window snapping feature, in Windows Explorer, but also extending to any Windows apps, as can be seen above.

To invoke it, all you need to do is hover over the 'Maximize' button and it pops out a grid which lets you snap the window to the chosen position. As can be seen in the video above, to reset the window to a floating window again, simply press the maximize button twice from a snapped position. It will even default back to the original position on your screen.

The new feature actually completely replaces the 'Maximize' tooltip and the button still operates fully as it did in Windows 10, meaning if you go to it and click the button, the window will maximize, and then float the window upon clicking it again.

One curious reader commented "Is there an option to disable it?" and I can report that there is an option to disable the window snapping feature under the Multitasking options of the 'System' settings. Upon disabling 'Snap windows' nothing happens when hovering over the maximize control, the tooltip is not restored, which would be a nice first bug report for this Windows 11 feature.

Why has Windows 11 leaked, but not the latest Windows experience packs? Easy, Microsoft Store is more secure and restricted than Windows Update 🙂

Microsoft somewhat acknowledged the leaks by tweeting "This is only the Start." which, by the way, indicated to us that we've only really seen the new Start experience. Our friends over at Aggiornamenti Lumia correctly reminded us that a lot of "what's next" is still under wraps in the much more secure 'Windows Feature Experience Pack' which haven't leaked.

Thankfully we won't have to wait for very long. In eight days Microsoft will tell us more and then we expect that the new build(s) will head to the Insider channels.

If you want us to check or test something out, let us know in the comments; or you can reach out to me on Twitter.