Over the next few weeks we will be adding many more focus items on Windows 7 including Touch, Windows 7 networking and media enhancements. Stay tuned for the ultimate Windows 7 focus from Neowin.net. Here is an overview of the new Taskbar in Windows 7.

Superbar
Even though the Taskbar is still named "Taskbar" in Windows 7, due to its fresh new look and awesome features, it is called as Superbar by many. The superbar has taken the Windows Taskbar to the next level since its launch in Windows 95.

The superbar by default uses large icons and is also more glassy than in Vista!

Improved Thumbnail Previews
Like Vista, Windows 7 taskbar also provides thumbnail previews of the running applications. But with the new superbar, you can now see previews of all running instances of that application. For example, if you have three IE tabs open, you can see previews of all the three tabs and easily switch between them by just hovering or clicking over the IE icon in the taskbar.

Aero Peek
The addition of the new improved thumbnail previews to the taskbar has led to a new feature called Aero Peek. This is very important when you want to switch between applications when several other windows are open. You might need to minimize every other window opened to look for your application or use ALT + TAB or Windows Flip 3D to browse the applications. With the new superbar, you can just hover on the thumbnail previews to get a preview of that window while the other windows fade away into glass sheets and easily switch to your application! 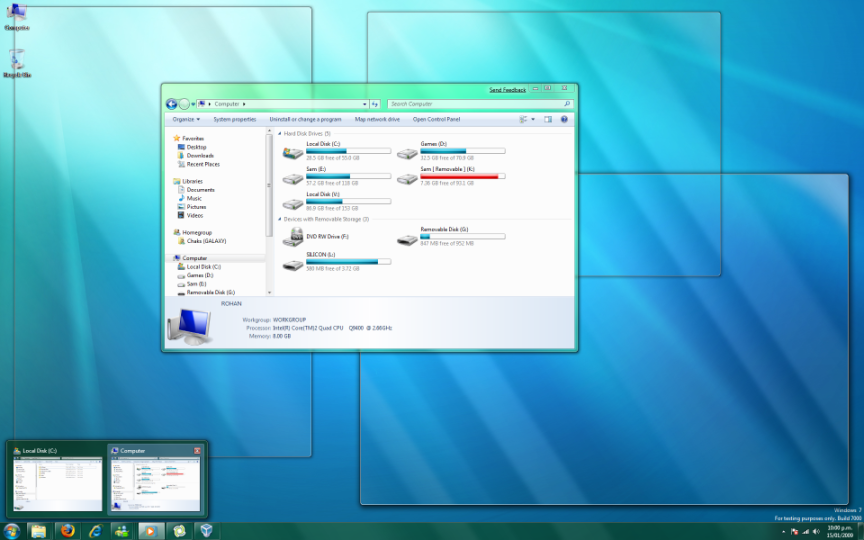 Show Desktop
This is one of my favorite icons in the taskbar. It has got a slightly different location in the new superbar with some additional functionality. The show desktop icon is now moved to the right hand corner of the taskbar.

It provides a preview of all windows open faded away into glass sheets when you hover over the icon. This helps to have a peek of your desktop before you switch. Clicking on the icon switches to your desktop. 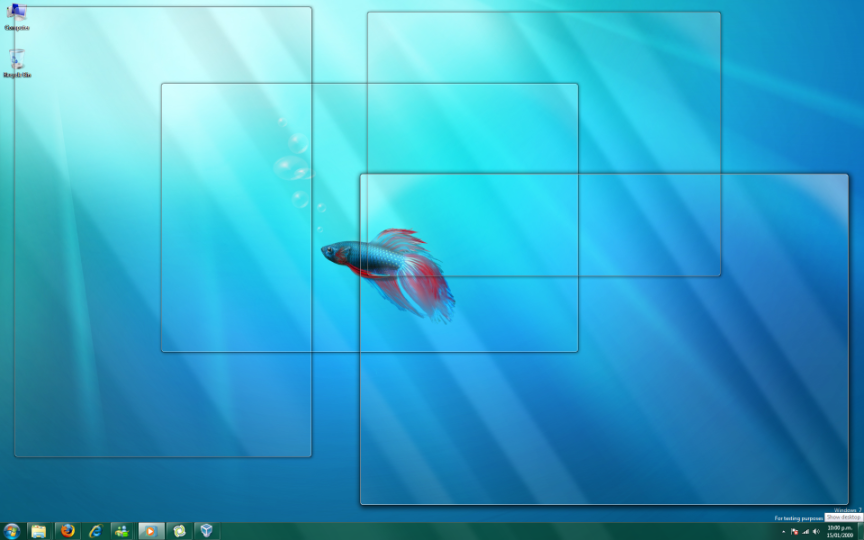 Identifying Open and Closed applications
With the new superbar, everything is an icon and as we saw earlier, thumbnail previews helps us to easily preview different instances of the same application.

But, how do I differentiate between the applications that are running and closed?

At first, it looks hard to find which applications are running and closed, but it turns out that it isn't hard after all. The applications running appear as overlay icons in the superbar and others appear normal.

In the screenshot above, you can see that the applications - Windows Explorer, Internet Explorer and MSN Live Messenger have multiple windows open.

Another cool way of keeping track of the applications running is using the new Color Hot-track feature. Each running application's icon is given a different color when you move your mouse over the icon in the superbar. The color is based on the icon itself.

New Application Previews
It looks like now developers can customize the thumbnail previews by adding Thumbnail Toolbars which provides the ability to add window controls right in context of taskbar buttons. 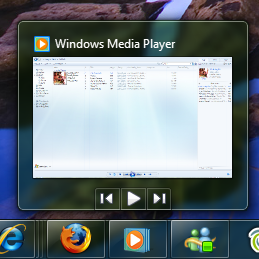 You can pause/play, skip to next or previous track using the thumbnail preview. The Windows Media Player deskband which was present in earlier versions(until Vista) has now transformed into a thumbnail toolbar. It would have been a lot better if volume up/volume down were also added to the toolbar and display visualizations when enabled. 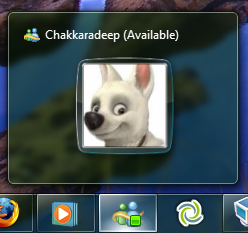 Expect more updates from various other third-party applications too in the future.

Jump Lists
This is again another new feature which developers can make use of. Jump Lists provide quick access to the applications' options like History of recently visited sites in Internet Explorer. They are readily available for you all the time in the list and you can just jump to that item in the list to reach the destination. 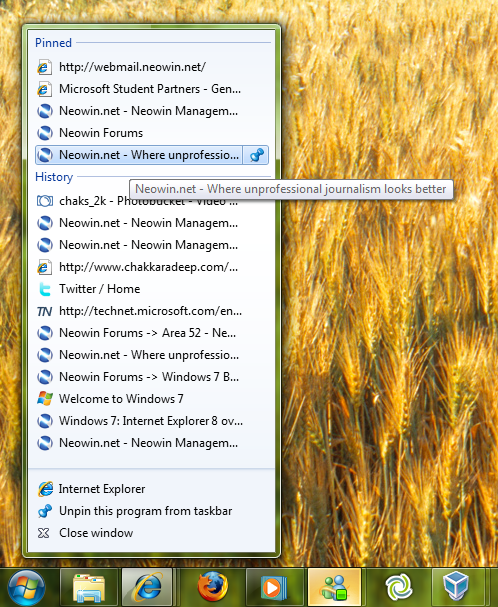 Right-clicking an icon in the superbar or moving the icon upwards with left click reveals its jump list. Developers can customize and add their own lists. By default, the list contains the program's shortcut, the ability to pin/unpin from taskbar and the ability to close one or all windows and a program's recent destinations.

Pin and Unpin Applications
Unlike in Vista or earlier versions, it is now very easy to Pin and Unpin icons to the taskbar. You can easily pin/unpin start menu items to taskbar with a right click on that item. 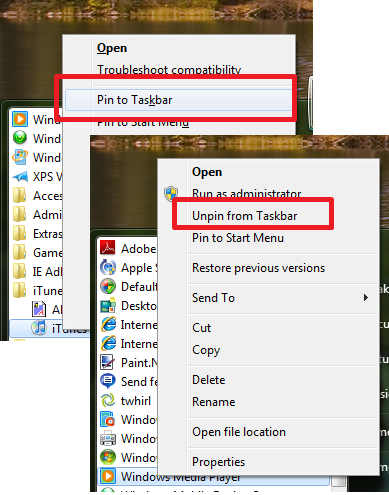 You can also easily pin/unpin the items in the jump list. Pinning jump list items helps to easily go to that destination. 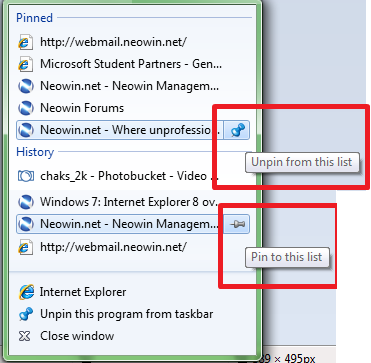 Notification Area
With the new superbar, users can now configure the notification area on how it should behave and is in total control of the user. The user can customize which applications to show notifications and not.

Customizing the Superbar
There is no joy if Microsoft doesn't provide a way to go back in time. Some users might not like the new way of grouping items, especially the icon overlay display where sometimes it becomes difficult for some users to identify which applications are running and closed. 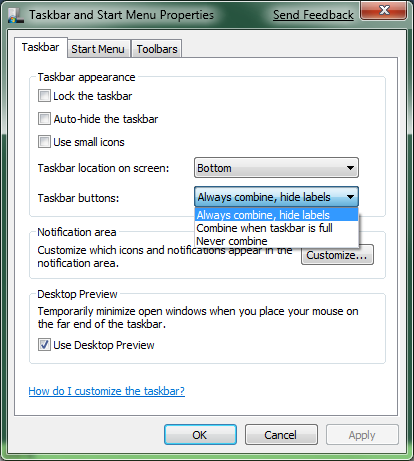 Below are screenshots of taskbar buttons with different options:

The superbar is indeed a major feature update for Windows 7. Of course, many users will find the superbar initially surprising as it needs some time to grasp the new features, but once you become familiar with the superbar, you will start enjoying the simplicity of the new evolved Windows Taskbar.