With Windows 7 still not available for everyone, news has surfaced that Microsoft may be researching and working on some of the architecture for Windows 8/9, which includes "128-bit architecture compatibility with the Windows 8 kernel." This is surprising, seeing as we're at least 3-4 years away from the next release, and still on the brink of the release of the latest version of Windows.

Microsoft Kitchen reports that they found a listing on a Microsoft employee's Linked-In profile (which has since been taken down - but hastily screenshot thanks to Microsoft Kitchen) with a job description that explained the employee, Robert Morgan is:

Also, on the same LinkedIn profile page, Robert's status goes on to point out that: "Robert Morgan got called into the office, alarms in the morning are great. Someone didn't set the test for the new AMD 128bit properly."

Based on Microsoft's repetitive claims that Windows 7 is a "Major" release and that their release cycles alternate from being "Major" to "Minor", Windows 8 should be a minor release, even though it doesn't sound like it will be if it incorporates this feature. It also sounds like Microsoft is already getting involved with some of the big names in the hardware industry, namely Intel, AMD, HP and IBM already, which is impressive this early on. Interestingly enough, AMD is actually working on a 128-bit processor currently, codenamed "Bulldozer".

Another status update, according to Windows 8 News the following was posted by Robert earlier this year:

"Robert Morgan is working to get IA-128 working backwards with full binary compatibility on the existing IA-64 instructions in the hardware simulation to work for Windows 8 and definitely Windows 9."

The sightings of more than one of these updates seem to indicate that 128-bit might actually be in the next version of Windows, although it's still far too early to tell whether or not this will be the case, as Microsoft is quite well known for removing features from Windows in the recent years. We'd take this "news" as a maybe if that.

Update: Robert Morgan does not work at Microsoft and 128bit Windows 8 does not exist. 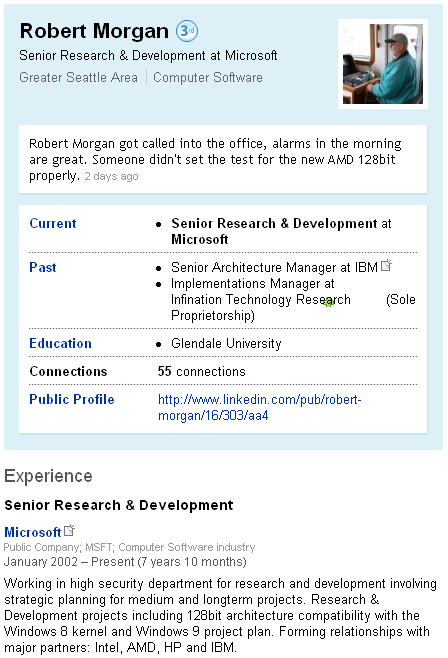 What does Neowin think? Do you think that 128-bit processing will be needed by the time Windows 8 is released?