As we get closer to the launch of the Windows 8 Consumer Preview version on Wednesday, February 29, Microsoft has been on a tear in updating its official Windows 8 development blog site. Early this morning, 15 hours after its last update, Microsoft posted yet another entry on the blog site. This time, the subject is languages; specifically how Microsoft will be adding more and better language support to Windows 8.

Currently, Windows 7 has support for 95 display languages. For Windows 8, Microsoft will be adding an additional 14 display languages (one new stand alone language and 13 Language Interface Packs) which means that Windows 8 will support a total of 109 languages that will cover 4.5 billion people around the world. Microsoft's Ian Hamilton writes:

In some countries, people can purchase PCs with a variety of languages preinstalled. With Windows 8, users will be able install additional display languages beyond those preinstalled languages. This means that the language of the PC no longer needs to be a major consideration when deciding on which model to buy. If the language you want is not preinstalled on the PC you like, you can now install the one you want. 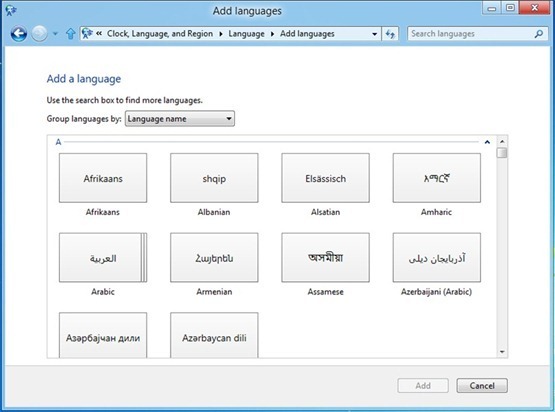 One interesting addition for Windows 8 is that the UK English is now a stand alone display language. As Hamilton writes:

We admit that this is something we should have done a long time ago. Windows users in the UK have gotten by with the US English version of Windows, and while we Americans knew this was not their favourite, that is clearly no defence. We believe that this version of Windows will also be widely used in India, Australia, South Africa, New Zealand, the Republic of Ireland and many other places.