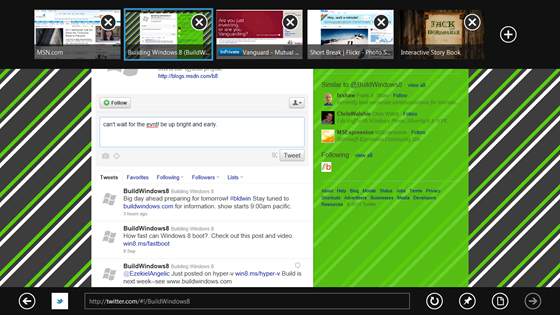 Windows 8 will, not surprisingly, come equipped with the next version of Internet Explorer 10. In the latest update on the official Windows 8 blog site, Microsoft's Dean Hachamovitch writes about how the new IE10 will give the user two different ways to surf the web. One is the more traditional desktop browser user interface. The other is the updated and graphically oriented Metro style experience.

Hachamovitch writes, "You’ll get the best immersive, touch-first experience of HTML5 websites with the Metro style browser in Windows 8. If you prefer more traditional window and tab management, you have that in improved form with IE on the desktop. Both run on the same IE10 engine."

While the Metro browser in the current developers version of Windows 8 is not yet ready for prime time, Hachamovitch writes that the team discovered that even with a mouse and keyboard, the Metro IE10 UI may actually be better than the standard web browser. He says, "While it’s a touch-first browser, it works well with keyboard and mouse or trackpad. If you've been doing more and more browsing on your phone, then you’ve likely become used to having almost no “chrome,” far more visual tab management, and a more immersive, less “desktop”-y, more manual browsing experience. You might find that you prefer the new Metro style experience of Internet Explorer 10 to the desktop."

Hachamovitch said it was important that both versions of IE10 have solid performance, including "full hardware acceleration of graphics, video, and audio." Both versions support the HTML5 language and both have solid security and privacy features including "SmartScreen, XSS filtering, and InPrivate browsing."

The Metro version of IE 10 uses Windows 8 touch features to allow for less typing to get to web sites. Hachamovitch says, "You see a touch-friendly, visual list of your frequent and pinned websites when you open a new tab or bring up the address bar." An example is shown below: 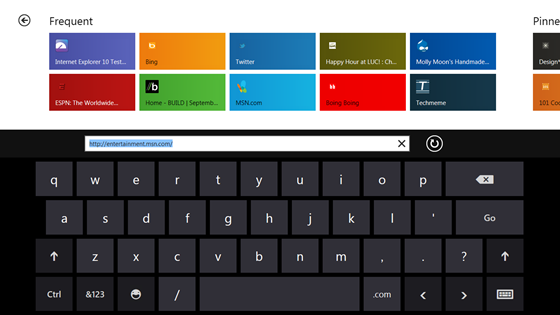 Users will also be able to show favorite web sites on the new Windows 8 Start Screen which should make accessing them quicker. In terms of other features Hachamovitch says, "Metro style IE supports touch panning and pinching to zoom. Pages are fast and fluid like the rest of the system because the HTML5 engine takes advantage of full hardware acceleration. You can see this in the scrolling and panning performance." He adds that Microsoft plans to work with web developers to optimize their sites to work with IE10's Metro user interface.

As far as folks who might feel Microsoft is creating two different web browsers with Windows 8, Hachamovitch says, "There’s only one browsing engine, which you can use with two different 'skins.' Over time, the Metro style experience will serve more and more mainstream browsing scenarios, even as the desktop browser continues to play a key role in many people’s lives. You can set your default to either style, seamlessly switch between them, or use any other browser you choose on Windows 8."