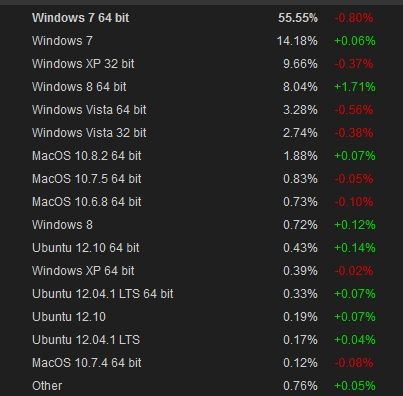 Last month, Valve's monthly hardware survey of its Steam users for December 2012 showed that the percentage of its Windows 8 owners was just behind those who used Windows Vista. This week, Valve updated its hardware survey numbers for the month of January 2013, and as expected the results showed Windows 8 overtaking Windows Vista, while also getting closer to Windows XP's numbers.

Windows 7 users of Steam represent 69.73 percent of all Steam owners, down from 70.47 percent from the month before. Windows XP is still being used by 10.05 percent of Steam owners. and if the growth of Windows 8 continues on Steam it should be close to, or overtake, Windows XP next month.

The combined number of Mac Steam owners is currently at 3.56 percent. After making its debut on the Steam hardware survey in December, the total number of Ubuntu users on Steam in January stands at just 1.12 percent.