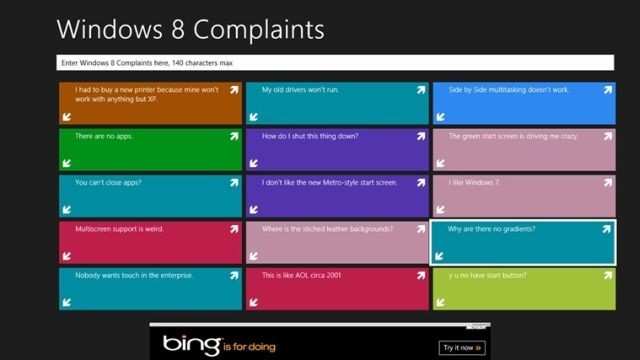 On Friday, we reported that Windows 8 Complaints, an app that had been made available for download from Microsoft's Windows Store, had been pulled from the store a few weeks after it was published. At the time the app was first made available in the store in early December, we attempted to contact its mysterious creator, listed only as "Software Developer", but did not receive a response.

Today, a comment in our article on Friday was posted by a person who claimed to be "Software Developer", who says he pulled the app from the Windows Store and that Microsoft had nothing to do with it. We have since received proof from the author that he is indeed the creator of the app via screenshots of his Windows 8 developer console that shows the number of downloads the app received before he pulled it on December 14th.

I can clear up a few angles of speculation for you. The developer unpublished the app from the store. Microsoft never asked for it to be taken down, and Microsoft did not take it down. It won't come back until new features are added, if ever. Something like the ability to respond to complaints or to provide support/training material in some form. While it was interesting to look at, at least 90% of the complaints were from folks who had no clue what they were talking about, straight up trolling or were not even valid but there were a couple gems. The software developer loves Windows 8. The Windows 8 complaints app had implemented more Windows 8 features than 90% of the apps in the store, check the features list if you like.

I made the app to generate ad impressions, which it did, with a handful of sarcasm and a pinch of bad judgement. But later decided it was more harm than good in its current form. Microsoft is not an evil company like Apple and Google. You can see examples of this in that the OSx EULA that prevents people from running it as a VM on non-apple logo branded hardware without becoming a software pirate and every single other thing Apple does that constantly angles everything toward their own man purse. Yeah, I said man purse, ever see a woman on stage doing an Apple keynote or in executive suite? Or the pay to play nature of the Google shopping results list and countless other examples. Microsoft does it right so many times.