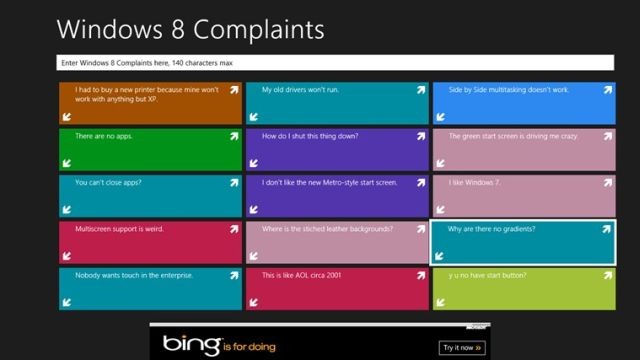 A few weeks ago, a new and free Windows 8 app was approved by Microsoft to be published on the Windows Store. The app was titled Windows 8 Complaints and it was designed solely to allow people to write up their issues with Microsoft's latest PC operating system. According to the app's description:

The app's developer was simply listed on the Windows Store page as "Software Developer".  When the app first came to our attention earlier this month, we used the app's email contact info to ask for more information, but did not receive a response. We also contacted Microsoft's PR reps to find out how they felt about having a Windows 8 app published in the store that was designed just for people to criticize Windows 8. At that time, Microsoft's rep told us, "As long as the app follows certification policies, they get admitted to the Store."

Well, it seems that something has changed since then, because today we noticed that the Windows 8 Complaints app was no longer available for download from the Windows Store. The app's page has also been taken down, although a cached page is still available for viewing. We have emailed Microsoft to find out when the app was taken down and if Microsoft asked for its removal and, if so, why.