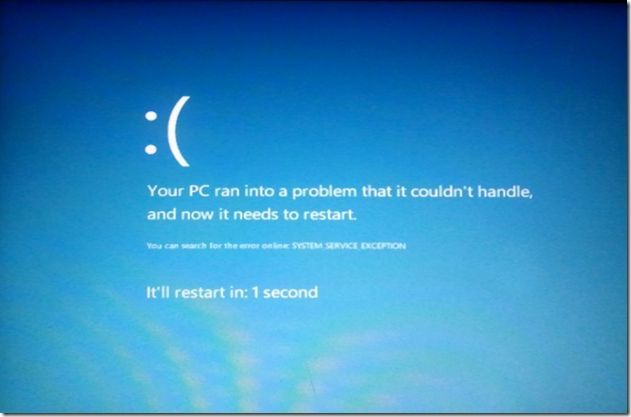 Windows 8 has a ton of new features that we have been covering extensively over the past 24 hours or so. But who knew that Microsoft would also make a change to one of the most dreaded screens of all? We are speaking, of course, about the "blue screen of death", the harsh screen that comes up when a Windows operating system decides that it doesn't know what to do and locks up. It's not something any Windows users want to see.

Under the new Windows 8 operating system, Microsoft has put in a new version of the blue screen of death. It's still something that you don't really want to see but this time, Microsoft has decided to give it a more sympathetic look. The fonts that display the error message are more modern looking and more importantly, you also see a big frown emoticon staring back at you. It makes you feel that instead of being angry with you, Windows 8 is sorry that it has to unexpectedly shut down and make you lose all of the work you have been doing up to that point.

Sure, it's a minor thing among all of the major new features and improvements in Windows 8, but we suspect that you will be seeing this new blue screen of death on occasion while using the pre-release operating system. But, as we get closer to the final builds and eventually RTM, the BSOD will hopefully never show its ugly (and sad) face.