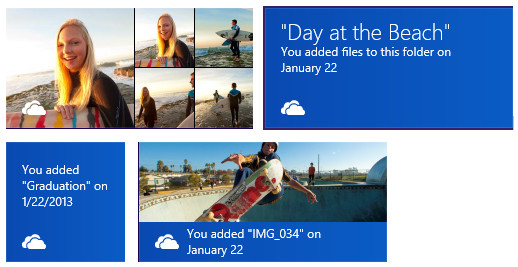 Microsoft seems to be in a Windows 8 app-update mood today. Earlier today, the company announced new features to its in-house Windows 8 Sports app and now there's also a new update for its SkyDrive app for both Windows 8 and Windows RT.

The official Windows blog reveals that the SkyDrive upgrade will add new live tile functionality, which will let users see a notification on the last file they upload to their SkyDrive account. The blog states:

Now the tile for the SkyDrive app will be useful for more than just launching the app, by providing at-a-glance info on what’s going on in your SkyDrive. Whenever you add new files to SkyDrive, the app tile shows you relevant details. If you add a document, you’ll see the document name, along with when it was added, and what folder it’s in. If you add photos, the tile gives you a nice view of those photos.

The app update is supposed to be on a rolling schedule, so you may not be able to download the new SkyDrive app immediately, but it should become available for all Windows 8 and Windows RT users within the next several hours.