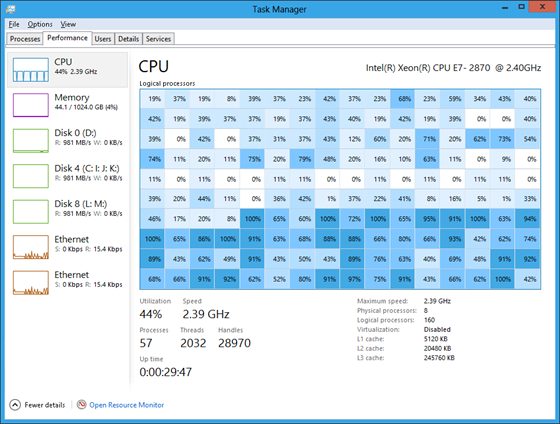 After taking a week off, the official Windows 8 developer blog has a new entry today. This one is kind of a follow up to a previous post about how the new version of the Task Manager for Microsoft's next PC operating system will work. While that older post was centered around a normal consumer or business PC, this new post concerns how the new Task Manager will work on a mega-PC set up, such as a server farm or data center.

Microsoft's Ryan Haveson writes that with the Task Manager in the current Windows 7 OS, it's very hard at times to monitor how each processor is be used in mega-PC operations. He states, "When you get to the 64+ logical processor range, the graphs get pretty small. If you are trying to figure out which processors are being heavily used, you really have to squint to figure it out. When you get over 256 logical processors, you can barely read the charts at all."

Haveson says that Windows 8's Task Manager can show off as many logical processors that the OS can officially support. That number? A whopping 640 processors. When the Task Manager has to handle that kind of a load, the heat map layout automatically scales and even creates a scroll bar if needed.

The Task Manager for Windows 8 can also be used by users to set up a process for each of a system's logical processors. Haveson writes, "To do this, you first find the ID of the logical core by hovering over one of the cells in the heat map, then go to the Details tab, right-click the process you want, and click 'Set affinity.'"

While most of you reading this will never work on Windows 8 in this kind of capacity, it's always interesting to see how Microsoft's next operating system will support more than just your normal desktop or notebook PC.