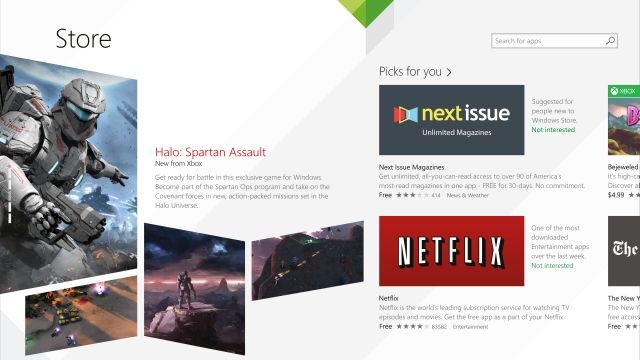 The launch of the GA build of Windows 8.1 to consumer also means that app developers who have been working with the older RTM and preview builds now have the final pieces to make apps that are 100 percent compliant with Microsoft's latest OS update.

In a post on the App Developer blog. Microsoft states that developers who have made apps for the preview versions of Windows 8.1 will have those same apps rejected for publishing from the Windows Store until they are updated for the release version of the OS. Apps that are already in the store can be updated to take advantage of the new features in Windows 8.1, including two more Live tile size options, better multitasking features and overall performance improvements.

App packages can now be up to 8GB in size for the Windows Store in Windows 8.1, and the store itself has a new layout, as seen above, that is supposed to help used find the app they are looking for faster and more efficiently. The Bing search engine will offer users recommendations for new apps to try out and they can finally auto update themselves by default for the first time.