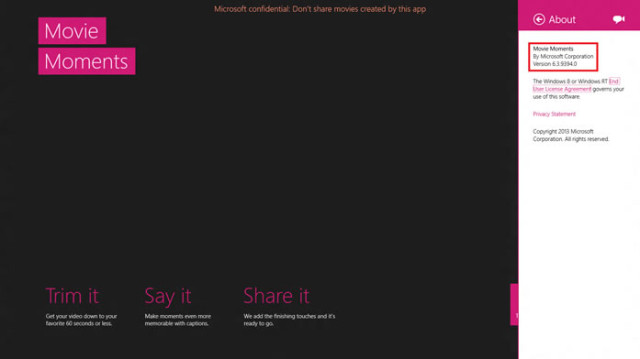 Recently it has been discovered that in Windows 8.1 build 9385, the most recent Pro Preview build that leaked to the internet last week, Windows Store apps have been silently updated through Windows Update. Users who installed the leaked build reported that after using Windows Update, a number of apps updated themselves silently, including the Movie Moments app that's new to Windows 8.1.

Originally in build 9385 Movie Moments sat at version 6.3.9385.0, but after a silent update some users are reporting their app is now at 6.3.9394.0. A different Movie Moments tile has been spotted in the corner of the app's information, so while this is a minor change, it shows that the silent update wasn't a mere version number adjustment.

In the Windows Update installation history, it was discovered that a successful installation occurred for "the following update: Microsoft.MovieMoments". Alongside this app getting updated, several other apps were found with new versions, including "PlayReady Client", "VCLibs Preview Internal" and "WinJS 2.0 Preview Internal".

Currently in Windows 8 there is no option to have updates automatically install, with users instead needing to visit the Windows Store app after being notified that there are new apps to be installed. Including automatic updates in Windows 8.1 would streamline the process of getting the latest apps on your device, and save you from the hassle of constantly visiting the Store.