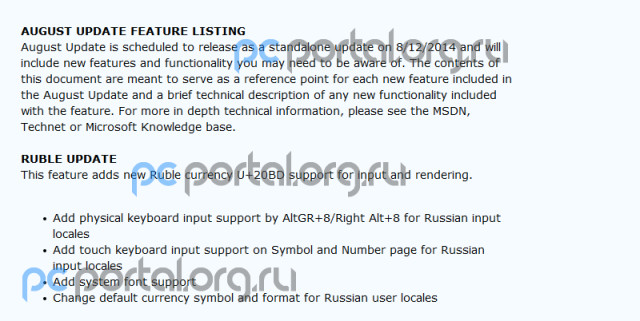 Over the past few weeks, Windows 8.1 update 2 has been referenced many times, but so far, no one has been able to figure out what all the update includes. It seems that this update will be small, when compared to update 1, and may only include enhancements to stability rather than front end features.

If you are wondering when update 2 will arrive, that is, after all while you are reading this post, thanks to some leaked information from our Russian friends, update 2 should arrive in August. Specifically, the update should be part of 'Patch Tuesday' which is the 12th of the month.

The image you see above comes from a Russian source and is said to be authentic, although, we cannot confirm that image is genuine Microsoft documentation. But, based on everything we had heard prior to this document surfacing, it aligns perfectly to that information.

While this update appears to be quite small, Threshold, the next big update to Windows, is starting to come into focus and you can read more about some of our scoops on what to expect with the update, here.

For now, know that update 2 is right around the corner but don't expect much with the update unless Microsoft has found a way to avoid the leaks that generally reveal what is in each update.