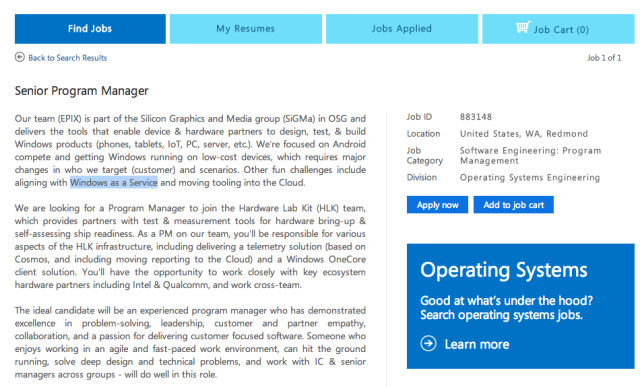 There have been rumors floating around for some time that Microsoft, in the future, could offer Windows as a Service. The idea seems entirely plausible as they already offer Office in this capacity, so it would not be a stretch to do the same with Windows.

In a job posting that went live today, Microsoft made a reference to Windows as a Service, but other than the name, not much else is known about the platform. Microsoft's OneCore also gets referenced as well, but we are not sure if the WaaS and OneCore are related in the capacity in which they are mentioned in this job description.

Microsoft already offers up a product that dabbles along these lines; what was previously code named Mohoro turned out to be Azure RemoteApp, which is a Desktop as a Service product for Microsoft. It could be possible that these two are the same, but clearly the naming is quite a bit different.

Windows as a Service is an interesting idea, but the execution will be critical for Microsoft because from a consumer standpoint, it fulfills a significant gap -- when was the last time you bought a copy of Windows? For the majority of users, they likely obtained their license when they bought new hardware. But the story is a bit different for the enterprise who may prefer on-demand licensing as they scale up and down in employees to keep their costs in check with their usage.