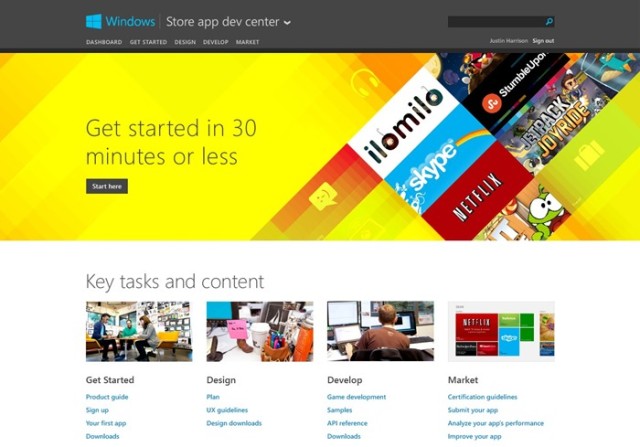 As Microsoft prepares for the launch of Windows 8.1 later this year, the company is also looking at how to improve their support for Windows app developers. This week, Microsoft announced a revamp of the Windows Dev Center website, which first launched in October 2011.

In a post on the Windows 8 app developer blog, Microsoft offers up the highlights on the redesign of the Windows Dev Center site. The site has now been broken down into four main areas: Windows Store apps, Internet Explorer, Windows desktop, and Hardware. Microsoft says, "The navigation model has changed so you can find the content relevant to where you are in the app development lifecycle."

In terms of Windows 8 app developers, Microsoft says that the Windows Dev Center site now has been streamlined to give software creators a faster way to get to the types of content they need to start building apps. That includes links to downloads and resources, along with code samples and One Dev Minute” tutorial videos.

Designers will also find new resources on the site, with Microsoft stating, "You can find useful downloads and reusable design assets more easily, and design inspiration and case studies give you the tools you need to make a unique experience on Windows." Finally, the Windows Dev Center offers up a new Market section that gives app publishers advice on how to effectively release and sell their Windows 8 apps.