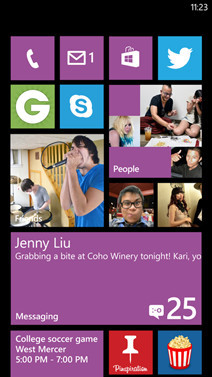 In late January, Microsoft began working with wireless carriers to roll out the long awaited Windows Phone 7.8 update to a number of older Windows Phone devices. Now there are reports that Microsoft has halted its rollout and it may be due to an issue with the Live Tiles feature.

As reported earlier this month, some people who received the update have since claimed the Live Tiles are not updating as they should. These issues could cause smartphones with Windows Phone 7.8 to use up their battery power faster than normal, and even to consume excessive amounts of data.

Earlier this week, Vodafone Germany's message boards posted up word that Microsoft had in fact halted the Windows Phone 7.8 updates for customers of Nokia's Lumia smartphones. While there were no reasons given for this action, there's evidence that Microsoft might be trying to fix the Live Tile problems before starting the rollout again.

WPCentral.com points to a post on Microsoft's MSDN forums, where Microsoft does admit they understand there are issues with the Live Tiles feature, adding, "The fixes will be considered for inclusion in an update to the phone operating system." While not definitive, it seems likely that Microsoft would like to make sure the Live Tiles issues are dealt with before proceeding with the rest of the Windows Phone 7.8 rollout.

We have emailed Microsoft to ask for an update on this situation and will update this post if and when we hear back from them.