Microsoft’s ‘rebooted’ Windows Phone operating system went on sale a year ago, launching across a handful of handsets, and with just a couple of thousand apps in its app store, the Marketplace. Just a few days ago, we reported that the Marketplace has since grown to over 40,000 apps.

With the help of data released by app store analysts Distimo, one year on from Windows Phone's launch, we take a look at some of the data from the Marketplace to see how it has developed over the last twelve months, and what's next for Microsoft's mobile ecosystem. (All data are correct to October 2011.)

While there’s plenty of noise across tech media and the blogosphere about Windows Phone becoming ‘the third ecosystem’, it’s not there yet. The Windows Phone Marketplace is actually now the fifth largest app store, behind Apple’s eponymous App Store, Google’s Android Market, the Nokia Ovi Store and BlackBerry App World. 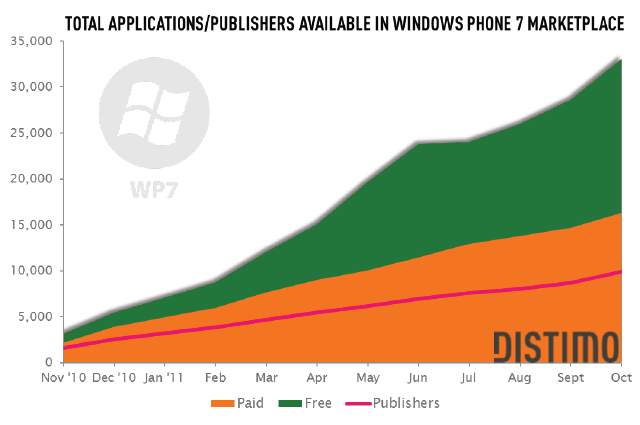 However, the Marketplace is growing steadily, with an average of 1,300 new paid applications a month, and 1,650 free apps a month being added; around 700 new publishers join the Marketplace each month too. Windows Phone is now available in 35 countries (up from 17 at launch), but the Marketplace experience, and availability of apps, varies considerably among these markets.

Also troubling is that of the 20,000 daily paid downloads, around 80% of these are actually trials of paid-for apps. Therefore, just 4,000 downloads among these top 300 apps actually generate revenue for developers each day in the US.

Germany, the UK, France and Italy are the next largest markets (in that order) by app download volumes, but the actual volumes in these markets – and therefore the revenues generated for developers from these downloads – are significantly lower than those in the US.

5.9% of apps are available in just one country; the US has 1361 such apps. At the other end of the scale, Portugal, Colombia, South Africa and Chile have no apps unique to their respective markets.

More significantly, perhaps, almost 47% of apps are available only in the original 17 countries in which the Marketplace was made available, indicating that a large proportion of developers still haven’t updated their apps to make them available to the 18 newer nations added to Windows Phone with Mango. Just one-third of all apps are now available in all 35 countries.

Different proportions apply to some countries, however. In the US and Australia, 50% of the top 100 free apps are games, well above the global average; for Brazil, the Netherlands and Norway, this figure is below 20%. Among the top 100 paid apps, games represent 64% of downloads in the UK, whereas this figure is less than 10% in Brazil and South Korea. I guess we Brits don’t mind paying for a bit of fun. *cough*

Tools & Productivity, Entertainment, and Music & Video are other popular categories across all countries.

A quick breakdown of the most popular free and paid-for apps in the US last month:

In many ways, there's no denying that Microsoft has come a long way in expanding the Windows Phone Marketplace over the last twelve months. It's no mean feat that they've gone from launching with a fairly narrow portfolio of apps to over 40,000 in one year, and it's not all fart apps and flashlights either - big names like Amazon, British Airways, Groupon, Bank of America, Sky News and many others now recognise that Windows Phone is a significant player in the rapidly growing world of mobile applications.

There's an inevitability to Windows Phone's eventual ascension to becoming the third ecosystem, but that has much to do with the demise of those that currently lie ahead of it. Symbian is something of a lame duck which, while still quacking away, is doing so on borrowed time, as Nokia has all but abandoned its long-term commitments to it; the Ovi Store will therefore cease to exist at some point in the not too distant future, and as a result it won't grow much larger than its current 50,000 or so apps.

Meanwhile, BlackBerry desperately struggles to assert its relevance in the market, and as RIM's share price plummets - with investors and customers alike rapidly losing interest - the number of developers willing to spend time creating software for the faltering platform will also dwindle.

So it looks like Windows Phone is guaranteed to take the third place in the mobile wars (without even having to try that hard) - but what happens then? Its not encouraging to see figures like those above, suggesting that as few as 4,000 downloads per day - across the entire United States - are generating revenues for developers. It's all well and good to be the third ecosystem, but if Windows Phone's app sales continue to lag so far behind its competitors, that bronze medal won't be worth very much.

The number of developers is increasing for now, with potential interest in the platform among app makers at an all time high. But rival platforms are growing much faster, and developers will go where the money is, where the users are. They won't wait indefinitely for Microsoft to grow the reach of its ecosystem beyond the flat and unimpressive device sales figures seen so far. The launch of Nokia's first Windows Phones will be crucial in getting more devices into the hands of end-users - but Android and iPhone are already so entrenched in the consciousness of mobile users, that this will be an exceptionally difficult task, even with handsets as widely admired and praised as the new Lumia 800.

Windows Phone has come a long way in a short time, but Microsoft now faces the unusual task of fighting a long, bitter battle just to make its third place count for something. With mobile poised to become the dominant arena for computing and communications, it's a battle that Microsoft can't afford to lose.