Modifying the Windows Phone 7 interface could appeal to some people and not in the slightest to others. The Metro UI is certainly divisive, but now, it can be changed to a previously unknown extent, as WPCentral reports.

Being able to change the phone theme may not have been something Microsoft envisioned with their mobile operating system but thanks to the coders and owners of the WP7 handsets, you can do just that. It may not be the most simple thing to do though, since a developer unlocked handset is required to modify it.

Beyond this, it takes some patience and willingness to learn how to get the best themes running. Apart from that, it seems like a fun way to differentiate your handset interface from the normal options. The application runs on Windows PCs only, but allows you to tweak every inch of the tile interface to look different. The below screenshot exemplifies the possibilities. 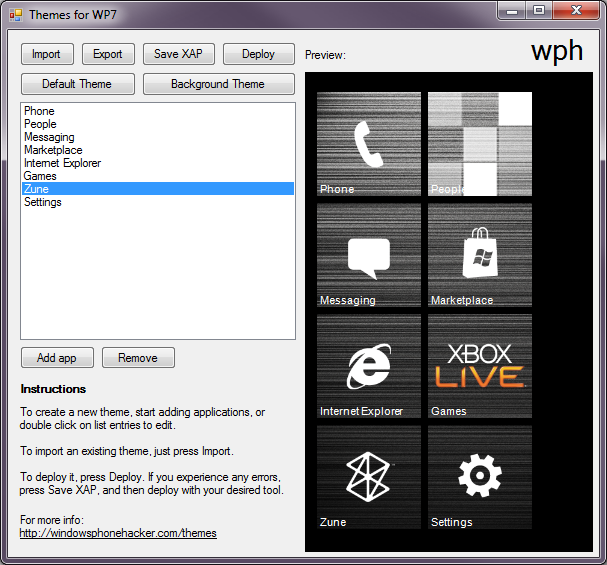 As the image shows, you can change each tile individually, including third-party application tiles. Images can be used as backgrounds to tiles instead of solid colors and themes can be imported and exported, meaning that they could potentially be shared around the internet in the near future. If a directory of Windows Phone 7 themes is not yet available, it will only be a matter of time until such a thing exists.

The program can be downloaded from its original source, at Windows Phone Hacker. The WPH wiki explains how to get a developer device unlock so you can enjoy the custom themes available.