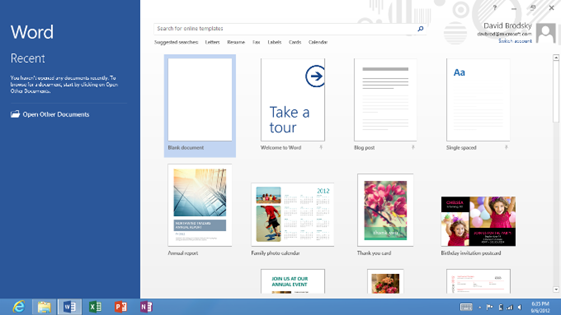 Microsoft revealed months ago that Windows RT, the version of Windows 8 that runs on processors with designs by ARM, would come with a pre-bundled version of its Office 2013 software suite. Today, the company offered up more information on how the Windows RT version of Office 2013 was developed and how it will be different from the version designed to run on x86-based processors (Windows 8).

In a post on the Office Next blog, Microsoft says the Office 2013 version for Windows RT will officially be called Office Home & Student 2013 RT and will contain versions of Word, Excel, OneNote, and PowerPoint. One of the development team's biggest goals was making sure it worked while still allowing for the Windows RT device to have as long of a battery life as possible. Microsoft states:

One example is the blinking cursor. There is no hardware or operating system support for a blinking cursor so software implements this feature using timers. To minimize the power impact, Office on Windows RT stops blinking the cursor after a few seconds if the user stops interacting with the application. When the user is away, we just show a fixed, non-blinking cursor. This requires no timer and is the best power citizenship option.

Many Windows RT-based products will likely have some kind of cellular wireless support. Microsoft says they have taken that into account with the Windows RT version of Office 2013. It states:

We can identify if the cellular network is unrestricted or if usage is metered (the user is paying for their usage), if the user is approaching or over their limit, and whether or not they are roaming. When we detect that the cellular network is metered we throttle network traffic to reduce our impact. When users are roaming or over their cap we inform them and give them the options to turn off network traffic.

The Windows RT version of Office 2013 will lack a few features compared to the regular Windows 8 version, including no support for "macros, add-ins, and features that rely on ActiveX controls or (third) party code", the lack of playing older media formats in PowerPoint RT and more. Windows RT products, including Microsoft's Surface tablet, will ship on October 26th with a preview version of Office 2013 but they will all get updates to the final version in the coming months.