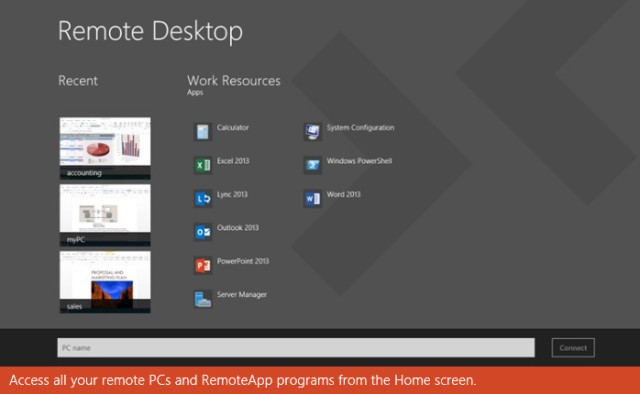 Microsoft will officially launch Windows Server 2012 R2 on October 18th, but it looks like the company is going to be offering some extra incentives for people to use their latest Server OS. The company has officially announced plans to release iOS and Android Remote Desktop apps that will connect to the operating system for the first time.

Microsoft very briefly mentioned the iOS and Android apps in a press release that mostly talked about the company's cloud-based enterprise software services. The apps are supposed to be released later this month but Microsoft has yet to offer a specific release date or pricing. The company will also release new versions of its Remote Desktop apps for Windows, Windows RT and OS X.

While Microsoft is not talking much about these new apps, Michel Roth, who is a Microsoft MVP on the desktop services side, posted some more information on his blog site today. He stated:

When you see the clients you'll notice they are pretty sweet and not as basic or as 'v1'  as you might expect.  The iOS Remote Desktop app supports iOS 6 and 7 and the Android Remote Desktop app is posed to support Android versions as far back as Gingerbread. The OS X Remote Desktop app provides even more functionality that you would expect from a 'desktop app'. Think about 'seamless windows' or 'applications portal'.

Microsoft certainly seems to be open to releasing its software products on many different platforms, which is something that Google has definitely not shown for the Windows operating systems. However, the press release did not mention a Windows Phone Remote Desktop app which has puzzled some people on Twitter.

We have emailed Microsoft to get clarification on any plans for a Windows Phone Remote Desktop app.

Update: We finally received an update from a Microsoft spokesperson who told us, "We are always looking at additional services based on what we hear from our customers. We have nothing to share at this time."