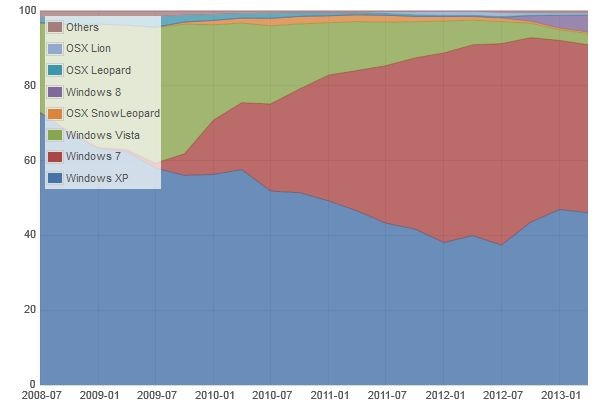 On Monday, we mentioned that Microsoft will end its official support for Windows XP on April 8th, 2014. With less than one year to go before that deadline, there are still a considerable number of PCs that are used every day that have the over 11 year old OS installed.

Today, new statistics were posted that showed just how much Windows XP is still used worldwide. The numbers come from Unity, the company that offers game developers access to graphics engines that can be used for, among other platforms, web-based games. They are based on data collected anonymously from the millions of people who have installed the Unity Web Player on their PCs.

In their web player hardware statistics, it shows that Windows XP is in fact still leading Windows 7 in terms of Unity Web Player users. The numbers, which were updated on March 31st, show that 46.1 percent of Unity Web Player users are on Windows XP, versus 44.9 percent for Windows 7. Windows 8 users are third with 4.5 percent and Windows Vista is fourth with 3.0 percent.

In fact, Unity's numbers show that the use of its web player software by Windows XP owners actually increased during much of 2012. On June 30th, 2013, Windows XP was down to 37.4 percent but rebounded up to 46.9 percent on December 31st, 2012 before going slightly down in March. Part of the reason might be that Windows XP is being used more in Asian countries. Indeed, the percentage of Unity Web Player users is number one in China with a whopping 24.6 percent, with the US in second with 11.7 percent.