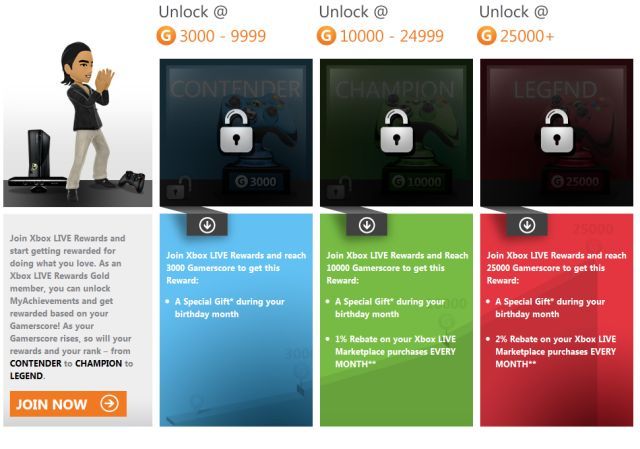 Microsoft has offered Xbox 360 gamers a way to show off their prowess with the Gamescore feature, whichs shows a player's overall score based on the Xbox Live Achievements he or she accululates in Xbox 360 games. Until today, a high Gamerscore was simply a cool thing to show off to your friends.

Now Microsoft has confirmed that getting a high Xbox 360 Gamerscore can also generate some real rewards. The company has launched a new program called MyAchievements which will give Xbox 360 gamers even more of an incentive to play and get a higher score.

Everyone who gets a Gamerscore of 3,000 and above and is a member of MyAchievements will receive some kind of special "gift" for their birthday. The fine print says the gift will be priced around 25 cents so we suspect that it's some kind of Xbox Live avatar gift item. People who reach the 10,000 Gamerscore level will receive a one percent refund on any Xbox Live Marketplace purchase every month.

For the truly dedicated Xbox 360 gamer, Microsoft will offer a two percent monthly Xbox Live Marketplace rebate if they reach the 25,000 Gamerscore level. While the rewards may be pretty small, it's still better than nothing and it's possible that Microsoft might add to the MyAchievements program in the months ahead.