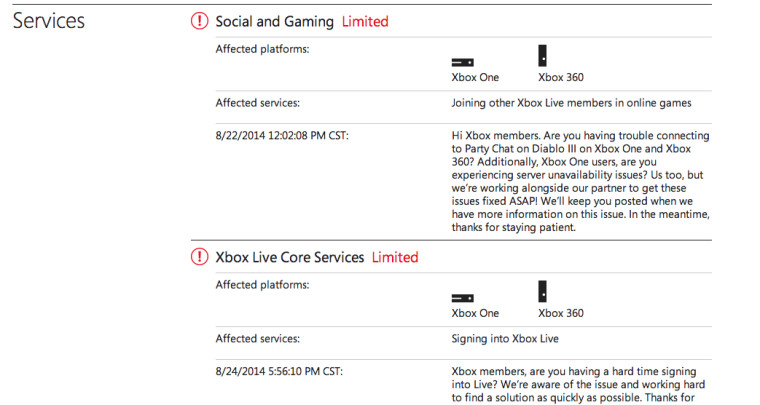 Earlier today, Sony was having issues with PlayStation's online services, and now it looks like Microsoft is headed down the same path. Sony's issue was related to a DDOS attack, but we have yet to hear if Microsoft's issue is because of the same reasons.

Both Sony and Microsoft have been pushing their online services to help differentiate their new consoles from each other, but it looks like they have a bit in common today as they have both experienced disruptions in service for the users. Seeing as online services for Xbox are a premium service, any outage is a serious issue, as it means that consumers are not able to access a service that they pay for with an Xbox Live subscription.

The Xbox Live issue are affecting "social and gaming" and "Xbox Live Core Services," according to the Xbox Live status page. The page acknowledges that there are issues with everything from Diablo III to signing into Xbox Live. Other services all appear to be operating normally, such as the ability to purchase content, access the Xbox website, and use music and video services.

No word on when Microsoft will be able to restore services back to the their normal operation, but we will keep you posted as this outage continues.

[Update] As of about 10 PM ET, Core services appear to be back to normal.