Last week, Microsoft unveiled the Xbox One S - an upgraded, and much smaller, version of its console - which will launch at the end of August. As in the United States, only the most expensive version of the One S will be available initially in the UK; the 2TB Launch Edition will cost £349.99, and pre-orders are already open.

But cheaper versions of the new console are on the horizon, including a £249 model with 500GB. And again, just as in the US, that means that prices of the current Xbox One are already falling. 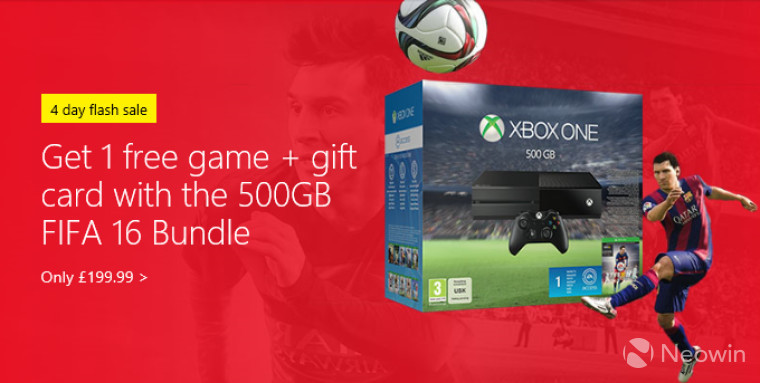 However, if you're not too fussed about FIFA 16, you can save even more on an Xbox One if you venture beyond the Microsoft Store. Until Sunday, Currys PC World is selling the 500GB Xbox One for £189.99, including one of four free games:

Get an Xbox One and your choice from one of four games for only £189.99. Hurry, ends Sunday! https://t.co/GQwGQXIVeE pic.twitter.com/mm4EhqH4rU

You can choose your free game from the following options:

Of course, not everyone will be tempted to buy an Xbox One, even at these discounted prices, with a new and improved model fast approaching. And some may even be planning to wait until next year to get their hands on Project Scorpio, the new Xbox that Microsoft is already referring to as the "most powerful console ever".