Back in April, it emerged that Microsoft was planning to launch the Xbox One in China, after authorities relaxed the country's ban on the sale of foreign gaming consoles earlier this year, which had been in place since 2000.

The nation's third-largest telco, China Telecom, has announced that it will exclusively sell the Xbox One in China from September, although the exact launch date has not yet been confirmed. A spokesperson for the carrier told Reuters that pricing has not yet been decided either.

The Xbox One's rival console, Sony's PlayStation 4, is also expected to launch in China this year. Both Microsoft and Sony have partnered with Chinese companies to manage the manufacture and distribution of the consoles domestically, in the Shanghai Free Trade Zone, which was established to help stimulate foreign investment in the country.

Although Microsoft and Sony have established joint ventures with separate local firms in China, both of these local partner companies are actually owned by the same conglomerate, Shanghai Media Group.

Update: WPDang reports that the Xbox One will cost 3499 CNY (roughly $565 USD) for the Xbox One with Kinect, and 2899 CNY for the Kinect-free SKU, and will include a two-year warranty in line with domestic requirements. 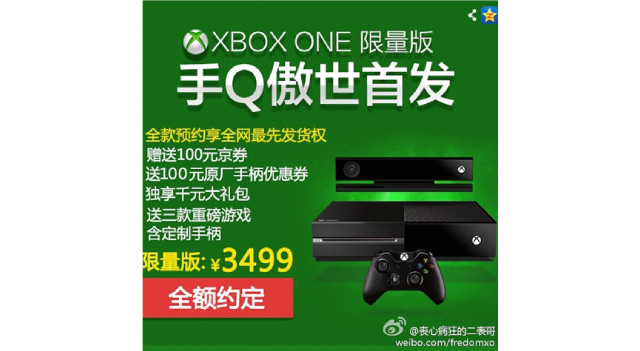